'In the Band' Book Tour & Review 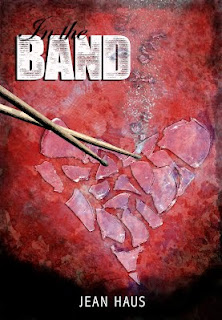 When family problems push Riley Middleton into giving up a percussion scholarship in another state and attending college from home, her friends push her to try out for a local rock band. Of course, Riley makes the band. She rules at the drums.

Riley soon finds out rock bands have a different dynamic than marching bands, especially when each of her male band mates has a major ego and is a major player. Two of them relentlessly flirt with her. The other—a dark, sexy rock god she can’t help being attracted to— is a total jerk and pushes her to quit. She becomes determined to ignore his rudeness and his hotness. Even if she was interested in jerks, a hook up would probably get her booted out of the ego-ridden band, and playing keeps her sane. Behind the drums, the  world and her family’s troubles evaporate.

If she wants to stay in the band, Riley just has to ignore the growing sparks between her and her band enemy. But as she gets to know the man behind the stage persona, ignoring  him proves to be more difficult than flowing through a time sig shift.

*New Adult/Mature YA for language and sexual situations.

I really liked this book. I kept telling myself I would take a break after a couple of chapters to work on laundry, or blog posts, or something else more "productive." I couldn't put down my Kindle to do so.

I really connected with Riley. She is struggling through her parents' divorce and her mother's subsequent depression. She has given up her dream of going to college in Virginia for drumming to stay local to take care of her little sister. Family is her number one priority. Her two best friends want better for her and basically force her into trying out for a band, Luminescent Juliet. She easily outplays her competitors and becomes a local rock goddess. Two of the other members desperately want her. The third member, known as Romeo, aspires to do nothing but piss her off. The feeling is mutual. She likes to annoy him back. The two of them feed off of each other in a steaming hot way.

Throwing romance into the mix can really mess up the relationship between band mates, as well as cause more problems at home. Add to the mix complications with her two best friends, and poor Riley is just in a disaster. You want her to make the right decisions, but can't help but feel sorry for her as she tries to figure out what those are.

I was also drawn to the whole college band aspect of the novel. While I didn't play anything, I was a serious band groupie and roadie while in college. It brought back some fun memories.

Jean Haus lives in Michigan with her wonderful husband and son who, other than cooking, have taken over homemaking duties since she started writing more. When Jean isn’t writing, she’s usually reading. Anything from young adult to historical fiction as long as there is a bit a romance, she’ll load it on her Kindle. She loves to cook, and someday she will create the world’s best potsticker.