Welcome to the book blast for Knightmare Arcanist, a new release fantasy from Shami Stovall. I have an excerpt for you to enjoy today before you download your own copy. Be sure to follow the tour to see even more excerpts and to check out reviews of the book. Leave questions and comments along the way for bonus chances to enter the giveaway! 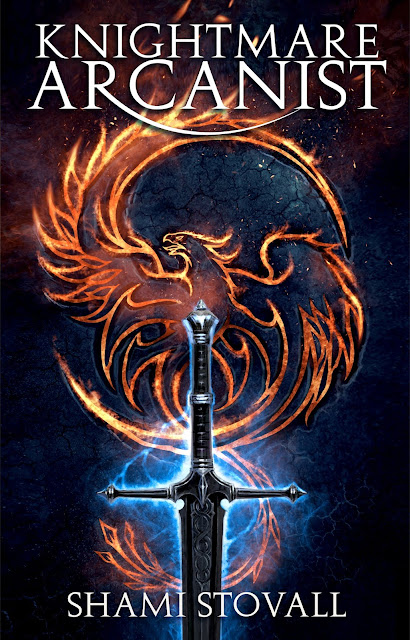 
Magic. Sailing. A murderer among heroes.

Gravedigger Volke Savan wants nothing more than to be like his hero, the legendary magical swashbuckler, Gregory Ruma. First he needs to become an arcanist, someone capable of wielding magic, which requires bonding with a mythical creature. And he’ll take anything—a pegasus, a griffin, a ravenous hydra—maybe even a leviathan, like Ruma.

So when Volke stumbles across a knightmare, a creature made of shadow and terror, he has no reservations. But the knightmare knows a terrible secret: Ruma is a murderer out to spread corrupted magic throughout their island nation. He’s already killed a population of phoenixes and he intends to kill even more.

In order to protect his home, his adopted sister, and the girl he admires from afar, Volke will need to confront his hero, the Master Arcanist Gregory Ruma.

A fast-paced flintlock fantasy for those who enjoy How to Train Your Dragon by Cressida Cowell, Unsouled (Cradle Series) by Will Wight, and Percy Jackson and the Olympians by Rick Riordan.

A flash of rain pelted the entire city, but only for a few seconds, as though the heavens coughed and forgot to cover their mouth. The man secured his pack shut, protecting his vegetables.

“Does this happen often?”

“Storms happen frequently enough,” he replied. “This ain’t no storm, though. It’s those flashy arcanists. They like makin’ a show. Just you wait. You’ll see somethin’ good yet.”

I headed toward the docks. Despite the creeping chill, I moved with energy and purpose. Crowds of people clogged the roadways, making travel by foot damn near impossible, even for an arcanist. Frustrated, I jumped onto the wheels of a nearby carriage and used the extra height to pull myself onto the roof of a building. The A-frame roof made for a steep trek, but the tiles were easy to grip, even when wet.

Once on top, I turned my attention to the nearest pier.

A tremendous flash of lightning lit the sky. Thunder chased after, strong enough to rattle the windows and pierce straight to my bone. Luthair shifted through the shadows as another round lit the sky. I knew some arcanists could control the weather, but I had never seen a demonstration so showy before.

A flurry of snow soon followed, but like the rain, it lasted only a few seconds. People lifted their hands in the air, trying to catch the snowflakes as they approached the earth. Most evaporated before anyone could hold them, but I managed to catch a few on my tongue.

The ocean waters beyond the docks swirled into whirlpools. Two cyclones of saltwater rose upward, forming pillars of ocean as thick as forty oak trees, each stretching straight to the sky.

Rapt by the show of magic, I almost didn’t notice the massive leviathan snaking through the ocean. Its shiny scales glistened with each new flash of lightning. The serpent-like body must’ve been as long as ten galley ships and as thick as a three-mast sailing ship. Although the mystical creature never lifted his head out of the water, I already knew who he was.

Available on Amazon / BN
This does include my Amazon affiliate link. That just means should you make a purchase through it, I can earn a few pennies at no additional cost to you. Thank you for supporting my websites!

Shami Stovall relies on her BA in History and Juris Doctorate to make her living as an author and history professor in the central valley of California. She writes in a wide range of fiction, from crime thrillers to fantasy to science-fiction. Stovall loves reading, playing video games, entertaining others with stories, and writing about herself in the third person.

The author will award a $25 Amazon/BN gift card to a randomly drawn winner during the tour.

a Rafflecopter giveaway
Posted by Andi at 3:30 AM 2 comments: