As readers, we often think of what we would like to see if our favorite book was made into a movie. Authors have these ideas, too! Today, author Judith Crow is sharing an excerpt from Dance With Me, plus her thoughts on turning her book into a movie. Let her know your thoughts in the comments section! Follow the tour for even more. And best of luck entering the giveaway!

Don’t tell anyone, but Kelli spends all her free time listening to folk music. Ok, it’s not what you’d expect from a popular fifteen-year-old, but that’s why she doesn’t want the whole world to know.

When Kelli follows the mysterious Tam Lane, she finds herself in a place where folk songs come to life. As she comes to terms with the world, she makes friends, uses her privilege to help others, and even falls in love.

But Kelli has forgotten the fates which await so many characters in the songs, and she soon finds herself surrounded by heartbreak. Determined to protect the people she has left, can Kelli change a fate which has been sung for centuries?
Read an excerpt:

They left the inn as the church clock began to chime midday and completed their journey in relative silence. As they neared Arlen Manor, Kelli began to feel a strange sensation of being watched, as though a hundred pairs of eyes were following her wherever she went. Looking carefully, she saw there were sculpted birds in many of the trees: great, black, hideous creatures with round eyes which stared unseeingly and followed her as she passed them by.

“They are crows,” William explained. “Centuries ago, before it was Arlen, the castle which stood here was called Corbie. That’s just another word for crow. According to family legend, when a disaster is about to befall the men of the family, the crows of Corbie Castle can be heard talking to one another.”

Kelli felt a shiver stalk down her spine, and she was grateful when they left the woods and moved up the long driveway to the house, which was a picture of gothic splendour in the late afternoon light. She immediately had the feeling that this was the place she had been meant to find, although she could not explain where the idea came from. Climbing down from the trap, Kelli followed William to the door, and stood behind him as he hammered his fist against it.

When I was growing up, I wanted to be in movies (who didn’t?!). In fact, I kept a wardrobe full of my sister’s exciting hand-me-downs and, every so often, I’d put them on and pretend I was at the Oscars, or a film premiere. You know, like you do.

I think my cinematographic aims have changed quite a bit since then, and I now have no intention of being in front, or behind, the camera. I would quite like to see some of my work made into films though. That’s my current dream.

I’m a very visual writer, so I imagine the people that I’m writing about, and I can see them in my mind’s eye. Where I have a very definite narrative voice or point-of-view, I tend to imagine myself as that person so, for Dance With Me, I have no real idea of how I imagine Kelli to look. I only talk about physical features when it’s important to the plot, so I don’t think I could point to an up-and-coming actress and say “yep, that’s who has to be Kelli!”.

I think one of the things that would work best for Dance With Me on the big screen is the settings and costumes. Kelli goes through various different places during the novel: from 21st century suburbia, through caves and hovels, to a mansion house. I would love to see the transformation of places, along with costumes and acting, but I still can’t identify the people I would want in charge!

I’m actually very pleased that this is the case. There are a lot of times that I’ve written a character “especially for” a certain actor or actress. In my first book, The Backwater, the character of William was written for either Robert Glenister or Samuel West, depending on my interest at the time! Dance With Me was a blank canvas, and the characters can be anyone or everyone.

When I’d finished the first draft of this blog, I discussed possible castings for Dance With Me with my sister, Clemency, to whom the book is dedicated. She and I both felt that we imagined Lady Arlen could be played by Carey Mulligan, and Sir Hugh (a relatively minor role) played by the lovely Hugh Bonneville – and not only because of the name! Beyond that, we had very conflicting ideas, which were quite funny really! Clemency wanted a time machine so that a younger Elliot Cowan could play Lord Arlen, while I would have used it to snatch a youthful David Tennant to play William.

In all honesty, I just really hope that one day I’m able to go to our local cinema and watch a film of Dance With Me, sitting in proud anonymity in the audience while people enjoy it (and, hopefully, say things like “well, that was great but I still prefer the book”). In the meantime, I have this fabulous book trailer which goes a long way towards bringing my characters to life: https://youtu.be/VckjQ8By5FE 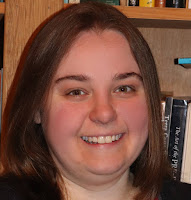 Judith was born in Orkney, grew up in Lincolnshire and now lives in the far north of Scotland. Her writing is inspired by the experiences of her life so far and she loves picking up on quirks and immortalising them in fiction.

Judith’s new book, Dance With Me, combines her love of folk music and creative writing, and finds her main character in a world where folk songs come to life. Her debut book, The Backwater, was a finalist in the Wishing Shelf Book Awards 2019.

When she isn’t writing, Judith is a primary school teacher who enjoys crafting and music, as well as being a generally doting spaniel owner.

Twitter
@jayzed_kay
Judith is giving away a $10 Amazon/BN gift card via rafflecopter. Follow the tour for more chances to win!
a Rafflecopter giveaway
Posted by Andi at 3:30 AM 27 comments: