Read an excerpt from The Dark Awakening by D.L. Blade

The Return (Sanshlian #3) by Dani Hoots

Where There Be Humans by Rebekah L. Purdy

Email ThisBlogThis!Share to TwitterShare to FacebookShare to Pinterest
Labels: fantasy, YA Bound

The Krome Kids by Chloe Tew

Welcome to the blurb blitz tour for the new YA fantasy, Plague Arcanist, by Shami Stovall! Please enjoy an excerpt before you download your copy and then follow the tour for more. Leave comments and questions along the way. Don't forget to enter the giveaway! 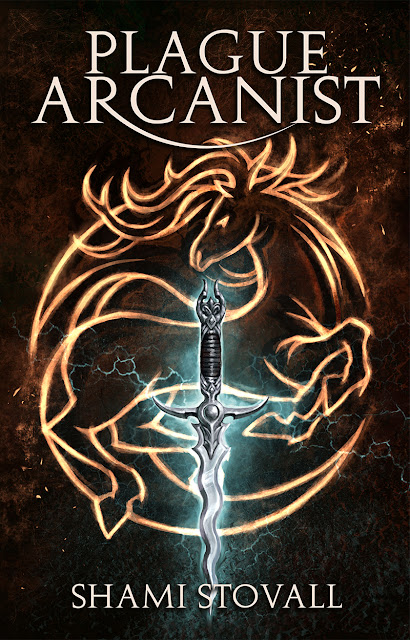 Deserts. Rogues. A secret hidden in an underground maze.

Every moment counts as Volke Savan races south to the city of New Norra. His goal: find Theasin Venrover, the famous artificer who may have a cure for the arcane plague. Separated from most of the Frith Guild—and even his sister—Volke must rely on the crew of the airship, the Sun Chaser, to help him find Theasin in time.

To complicate matters, the desert city of New Norra is steeped in mystery, and the massive maze under the streets could potentially solve all of Volke’s problems. With hunters after him, and dread pirates in the port, Volke finds himself forced to choose between equally terrible options…

Continue the Frith Chronicles with the fourth book, Plague Arcanist!

Praise for the Frith Chronicles!

“Perfect for those who enjoy the Codex Alera series, the Homas Wildus series and the Harry Potter series. Stovall is quickly becoming a name I look for."
- Seattle Book Review (for Knightmare Arcanist, Book I)

I had been infected.

Not with something mundane or manageable, but with the arcane plague—a blood disease that affected only the magical. It drove mystical creatures insane within days and slowly corrupted arcanists over the course of months. Each beat of the infected person’s heart betrayed them, spreading the disease throughout their body.

Those infected turned to mayhem and evil. Their madness made even cruel suggestions seem reasonable. It warped every inch of them, and there was no known cure—at least, not yet. Once someone contracted the illness…

The legendary swashbuckler, Gregory Ruma, had thought he could bring back his dead wife with the deaths of countless others. Rylin, the griffin, had tried to consume his own son. The plague-ridden gargoyle I had fought on Calisto’s ship had tried to rip apart all life he’d come into contact with.

I carried the same disease they did.

I rubbed at my arms as goosebumps formed. If I dwelled on the situation, I’d never have the strength to solve the problem. I had to focus on the immediate—on the new day awaiting me.

“Volke, are you okay?” Fain asked.

He stood close, his dark eyes narrowed in concern.

When I had first met Fain, he had been a pirate aboard the infamous Third Abyss. It amused me, that of all the people willing to stand by my side, he was one of them. He was immune to the arcane plague, however, which was the primary reason I hadn’t insisted he abandon me.

All arcanists had a mark on their forehead—a star with the picture of their bonded mystical creature, their eldrin, wrapped around the seven points. Fain’s arcanist mark had a wolf woven throughout. Well, not a wolf, but a wendigo, a mystical creature with a wolf-like body, a skull mask over its face, and large antlers. They were beasts of consumption and known as man-eaters, the one category of creature unaffected by the plague.

Wraith, Fain’s wendigo, sat at Fain’s side, his wolf-gaze locked on the descending airship. Wraith’s gray pelt swished around in the wind, but his fluffy tail remained tightly wrapped around the side of his body. He had no antlers, just nubs where they had once been.

“Do we have to board that… thing?” Wraith whispered, his voice gruff.

Fain patted Wraith behind his skull mask. “It’ll be fine.”

“I haven’t heard of any airships crashing.” Fain gave me a questioning glance. “Right?”

Airships were few and far between. Of course no one had heard of them crashing—most people had never even seen one. But I didn’t want to spook him or Wraith. “I doubt it’ll crash.”

Shami Stovall is a multi-award-winning author of fantasy and science fiction, with several best-selling novels under her belt. Before that, she taught history and criminal law at the college level, and loved every second. When she’s not reading fascinating articles and books about ancient China or the Byzantine Empire, Stovall can be found playing way too many video games, especially RPGs and tactics simulators.

If you would like to find a full list of her novels and audiobooks, you can do so here: https://www.amazon.com/Shami-Stovall/e/B07KXXPJ74%3F

If you want to contact her, you can do so at the following locations:

Website: https://sastovallauthor.com/
Twitter: https://twitter.com/GameOverStation/
Facebook: https://www.facebook.com/SAStovall/Email: s.adelle.s@gmail.com
Shami Stovall will be awarding a $25 Amazon or Barnes and Noble GC to a randomly drawn winner via rafflecopter during the tour.

a Rafflecopter giveaway
Posted by Andi at 3:30 AM 7 comments: