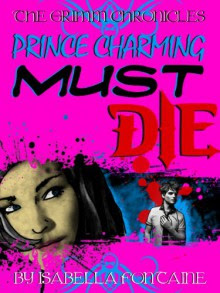 Grimm's Fairy Tales come to life in this exciting Young Adult adventure series! 18-year-old Alice Goodenough must use her magic pen to vanquish the evil before it threatens the world!

FREE read for your Kindle!

Snag the rest of the series here.

Ken Brosky received his MFA in writing from the University of Nebraska-Omaha.
Posted by Andi at 11:58 AM No comments: Links to this post

'The Atlanteens Trilogy: Veritas (Book #1)' by AMI Noone 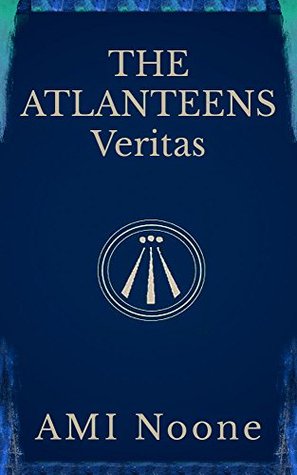 The truth will set you free...

Hundreds of years in the future, on a war torn Earth, a group of beings, only referred to as, the Watchers, came from the Heavens and built a paradise for the last remaining humans to live in. They called this paradise Edin.

Sixteen year old Maya has lived in Edin, since the day she was born under the watchful eye of Edin's creators - The Watchers. Every year the Ascension Ceremony takes place in Edin and those who are chosen can ascend to the Anzu, the watchers Heaven. This is their reward for living a just and honest life in Edin. The day of the ascension is a happy an joyous occasion that is celebrated by everyone. But before this Ascension Ceremony begins, Maya will learn a terrifying truth and will face the hardest choice of her life - will she continue to live the way she has always done or will she fight for her friends, her family and her future.

Today Maya is in paradise, but tomorrow she will learn that she is an Atlanteen and the truth will set her free.

See all books by this author here.
Posted by Andi at 2:56 PM No comments: Links to this post What you do tomorrow, you'll pay for today.

Life was easier in the cage, now Lara Crane’s life is under a microscope.

She thought she was out, ready for a normal life, but with the Feds endless questions and tests, Lara realizes she might never be free.

Things would be worse if not for Donovan. They promise to ride it out together as Lara is fitted with a time travel restraint, designed to not only stop her, but to save her life as her mind spirals out of control. No more second chances. No more time travel to revert everything back the way it was once before.

As the danger increases, so does Lara’s headaches and nightmares. Her brain is desperate to be free, loose, and as the future begins to flash all around her, Lara is terrified the end might be near.

And maybe she doesn’t have a future at all.


I turn up the walkway and the door opens. Donovan steps down and I fall into his arms. “Don’t scare me like that again.” He whispers and kisses my cheek.

Promising I won’t, my arms tighten around his waist as he takes my face in his hands and kisses me. I was a fool to believe I could live without him, do all of this without him. I got scared. I almost gave up.

But I don’t give up. I’m a Crane and a Montgomery. A little bit sass and a lot of determination. I just need to find an answer.

Donovan takes my hand and we go inside. His dad is off at his job, I guess and the home is empty. The living room is cramped and there’s a newspaper on the sofa. Donovan doesn’t bother to fold it as he tosses it onto the coffee table.

I sit beside him and he holds my hand. Our knees knock together and he leans in to kiss me. I have a lot of explaining to do, but his kisses are a source of comfort. A way to recharge my strength. It’s nice to know that through all of this he still loves me.

“Nothing’s been easy.” Donovan says it in a way that it doesn’t sound like a hardship. It sounds like a challenge. A bet. Like he’s daring life to throw something else our way.

I wish he wouldn’t.

“We’ll get through it.” I touch the back of his head.

“It makes me sick to think how my family has gotten you involved in all this.” Donovan shakes his head and I stare at him.

“My mom? I don’t know when I’ll stop feeling so guilty. When I saw you on CSPAN. The news…” Donovan sighs. “She’s been in jail for almost a year so when will I feel better?”

Never seems like the wrong answer. Sometimes I forget with all the time travel drama that Donovan is going through something too. His transition is hard.

“I guess you don’t have an answer, huh?” Donovan smiles and its part sad. Part happy.

“I wish I did.” I shrug. “I’m glad we have each other. Does that count for something?”

“It counts for a lot.” Donovan runs his hands behind his head. “Dad lost his job again.”

He pauses as he waits for me to say something. My brow furrows. “I’m sorry.”

“He’ll find something else. He always does.” The stigma of being a James, of what Rewind did, carries on and it seems to follow Donovan’s dad around wherever he goes.

“I don’t think we’ll lose the house. But I think I’ll need to sell the Porsche. Dad needs the money more than I need that car.” He gazes off into space and can’t look at me.

“Oh Don,” I put my hand on his cheek. “You really think that car is important to me like you are?”

He leans his head against mine. “And what will everyone say? You know what a big deal I used to make about getting that car. About everything. Being bigger and badder than all the other guys at school. Now look at me.” Donovan wipes at his mouth and there’s disgust in his eyes.

“Who cares what they’ll say?”

“I care.” Donovan sighs and stands up, his hands on his hips. “We had so much. I thought I had everything. The money. The giant house. Nothing could ever go wrong for me because I was a James. The best girlfriend. We had a real future. Any future we wanted.”

He leans against the wall, pulls back the curtain and studies something outside. I go to him and wrap my arms around his waist, resting my head on his back. “You still have me, Don.”

“And thank God for that.” Don faces me and I stroke his forehead. We lean on each other and tenderly he kisses me. He makes me his again, just like he always does when we’re close.

“An hour ago and you tried to get rid of me.” Donovan’s face falls when he says the words.

“Because I love you. Because I’m scared. You know I can’t say things like that easy. I hate…We’ll just do it, okay? We’ll find a way out of all this. Because anything else…” I shake my head and we come together like lovers.

But we’re as trapped as mice in a cage. The cage might be bigger, prettier, but I can’t think of a way out. I can’t say that. I probably shouldn’t even be thinking it. Donovan needs me to be strong and that’s exactly what it is I’m going to do.

a Rafflecopter giveaway
Posted by Andi at 4:45 PM No comments: Links to this post

Read an exclusive excerpt from 'Scales' by Pauline Creeden Verona is a bottom feeder. She is the one mer in her clan who is considered the ugliest and least intelligent. Growing up with the constant bullying and abuse wasn’t the worst of what her kind had in store for her. At seventeen years old, she must now endure “The Reckoning.”

The scales will measure her worth to her clan. Will she endure thirty days as a land-walker to gather information and knowledge to appease her clan and return a valued member? Will she wait three years, until she is twenty, and find a mer of her kind to accept her and marry her? Or will she suffer exile for the rest of her life?


Because I am the bottom feeder, it is my job to survive the Reckoning and prove that I am worthy to stay with the clan. If they find out that he helped me, they’ll send him out on the Reckoning, too.

Suddenly I stop and yank my arm from his grasp. “You can’t do this. You can’t help me.”

He sneers. “A Mer with half a brain would say thank you.”

He snatches my wrist again and drags me along with him. I follow reluctantly.

“Where are we going?”

“Shut up and swim faster. We need to get salve on your wounds so they will clot. I’ve got some hidden this way.”

We swim in silence toward the shallows until we find another reef, round and in hues of purple and orange in the bright sunlight. A buzz on the current signals that the sharks are finished with the marlin and are following again, or perhaps it’s another set of sharks...there are only two.

Pauline Creeden is a horse trainer from Virginia, but writing is her therapy. In her fiction, she creates worlds that are both familiar and strange, often pulling the veil between dimensions. She becomes the main character in each of her stories, and because she has ADD, she will get bored if she pretends to be one person for too long.