Meet Johanna Parkhurst, author of 'Here's To You, Zeb Pike' 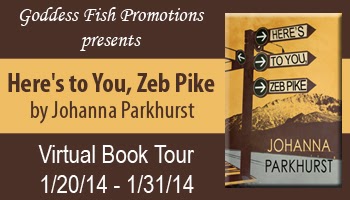 Johanna Parkhurst is the author of the young adult novel Here's to You, Zeb Pike, which I greatly enjoyed reading. Get to know her and the characters a little bit better. Remember to leave a comment or question below!


What was the inspiration behind this book?


Thank you so much for having me! I’m so excited to be visiting your blog.

I’ve taught and worked in middle schools for a decade now, so this book was influenced by many, many different teenagers and their struggles. Dusty’s issues with his parents were based on a situation I encountered my first year of teaching, when I taught a group of siblings who had often had to fend for themselves because their parents weren’t around. Casey’s problems with his father and Emmitt’s difficulties coming to terms with the idea that he might be gay are based on other conflicts I’ve watched students face throughout the years.

To which character do you most relate?

What is one of your favorite things about your book?


Probably Dusty’s incredible dedication to his brother and sister. I also really appreciate Emmitt, because he’s kind and has great intentions, even though his popularity and status at school mean that he could choose to be a total jerk.

If I had to pick a part of the plot that’s my favorite, I think I’d pick the scene where the hockey players brawl. It was an incredibly fun scene to write, and Dusty figured so much out in that scene.

What kind of research did you have to do for this book?


I did a decent amount of research on Zebulon Pike, but I also already knew a lot about him from teaching history in Colorado. I also did research on the procedures of the social services system to make sure that the way I wrote Dusty’s removal from his parents was accurate.

You grew up in Vermont and now live in Colorado. What are your favorite things about each state? Would you ever move back to Vermont?


I love so many things about both places, which is probably why all my books so far have been set in one or the other (or both). I love the sense of community in the small towns in Vermont, as well as the beautiful views there—I don’t think there’s an ugly landscape anywhere in Vermont. With that said, I love the climate in Colorado; it’s sunny, like, 300 days a year here. The views are different from Vermont, but they’re just as beautiful. I also really love the people I’ve met here in Colorado.

Colorado is probably my home for life. I still love visiting Vermont, but it would be very hard to leave the Colorado sunshine. Also, the skiing’s better here.

Where is one of your favorite hiking spots?


Given the title of this book, I should probably pick something around Pikes Peak, huh? I really did enjoy my first attempt climbing the Incline, which is this incredibly steep, old railroad track that runs up the bottom section of Pikes Peak. You end up climbing over 2,000 feet in less than a mile. When my friend and I attempted it, we both got totally smoked by her nephew, who was at the top while I was still trying not to faint somewhere on the side of the mountain. Finishing that climb was a total rush.

What is one of your favorite things about teaching teens?


I love how they constantly surprise me. Just when I think I’ve got a student’s point of view or perspective figured out, they do or say something that shows I don’t really them at all. I also really love watching them grow and change. I was on a field trip recently with some 8th graders right now who I’ve known since they were in 6th grade. It’s amazing to think of the changes they’ve gone through as they’ve worked to figure out who they are and what kind of people they want to be.

On what other projects are you currently working?


I have another book coming out from Harmony Ink Press in March called Every Inferno. I’m very excited about this book; it’s different from almost anything I’ve ever written. The main character is dealing with pretty serious anger issues, so it’s a little darker than Here’s to You, Zeb Pike…and there’s a mystery element to the book!

What is something readers may be surprised to learn about you?


Most people are surprised to learn that I’m a huge football fan—probably because I’m also totally klutzy and can’t play football to save my life. I love the Giants and Broncos (Giants from when I lived on the east coast, Broncos since I’ve lived in Colorado…the Manning thing doesn’t hurt either), and I used to be a fantasy football fanatic. I had to quit because of what it was doing to my blood pressure.

Is there anything else you would like to add?


Thanks so much, again, for having me, and thanks to all those readers who dropped by for this interview! This book is very special to me, so it means a great deal to me to be able to share it with the world.

Thank you so much for your time! 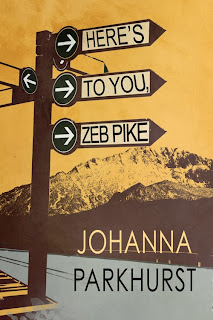 Here’s To You, Zeb Pike
by Johanna Parkhurst

Fact: When Zebulon Pike attempted to climb what is now known as Pikes Peak, he got stuck in waist-deep snow and had to turn back.

That’s the last thing Dusty Porter learns in his Colorado history class before appendicitis ruins his life. It isn’t long before social services figures out that Dusty’s parents are more myth than reality, and he and his siblings are shipped off to live in Vermont with an uncle and aunt they’ve never met.

Dusty’s new life is a struggle. His brother and sister don’t seem to need him anymore, and he can’t stand his aunt and uncle. At school, one hockey player develops a personal vendetta against him, while Emmitt, another hockey player, is making it hard for Dusty to keep pretending he’s straight. Problem is, he’s pretty sure Emmitt’s not gay. Then, just when Dusty thinks things can’t get any worse, his mother reappears, looking for a second chance to be a part of his life.

Somehow Zebulon Pike still got the mountain named after him, so Dusty’s determined to persevere—but at what point in life do you keep climbing, and when do you give up and turn back?


A few minutes later, Emmitt and I are walking down the wide school hallway. Emmitt studies locker numbers as he looks for mine, and I study Emmitt. He has dark-blond hair that’s kind of curly and hangs down around his ears. His eyes are really green, as green as—well, once I start thinking about it, my dad’s. Even though he doesn’t look that big, you can tell he’s pretty built. Must be the hockey. He’s wearing khakis and a button-up shirt. I look down at my black polo and old jeans and wonder what the other kids at Colby are going to be dressed like. The fact is that this guy is really good-looking, and I can’t keep my eyes off him as he explains what the classrooms are on each side of the hall we’re walking down. I’m definitely going to get lost at some point during the day.

It was probably late last school year—the end of eighth grade—when I got really worried about the fact that I just didn’t think girls were all that amazing-looking. Race could babble on about them for hours. Jasmine has the most amazing boobs, I’d love to get to second base with her and Did you see those jeans Erin’s wearing today? Holy shit, that ass, Dusty. Jasmine’s boobs and Erin’s ass never did anything for me, but when I had my first PE class with Daniel Garcia-Allan, I started to realize why. I got a B in that PE class only because I missed most of the directions Coach Cartwright gave us.

At first it completely freaked me out, and I spent about a month trying to figure out what I was going to do. Then I realized there wasn’t much to do. I was so busy taking care of Matt and Julia that it wasn’t like I had time to date anyway, and Race always just assumed that was why I didn’t ask any girls out. I’d still dance with a few of them at Prescott dances, and nobody ever seemed to guess that if I had it my way I would have been dancing with a six-foot-three basketball player who definitely did not have C-cups.

Johanna Parkhurst grew up on a small dairy farm in northern Vermont before relocating to the rocky mountains of Colorado. She spends her days helping teenagers learn to read and write and her evenings writing things she hopes they’ll like to read. She strives to share stories of young adults who are as determined, passionate, and complex as the ones she shares classrooms with.

Johanna holds degrees from Albertus Magnus College and Teachers College, Columbia University. She loves traveling, hiking, skiing, watching football, and spending time with her incredibly supportive husband. You can contact her at https://www.facebook.com/johannaparkhurstwriteson or find her on Twitter at https://twitter.com/johannawriteson.