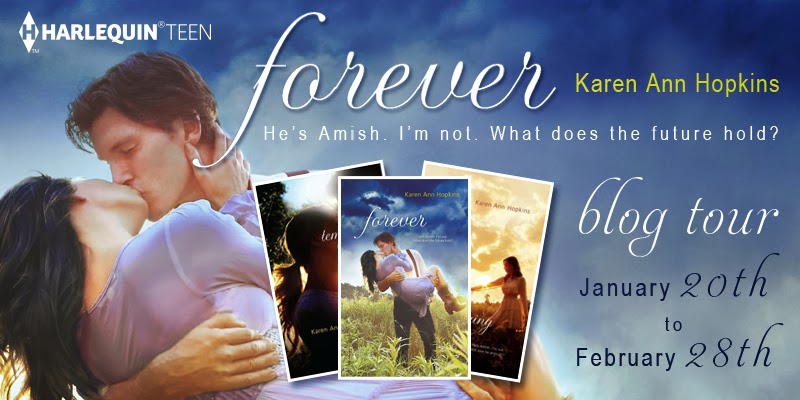 Today we would like to welcome YA author Karen Ann Hopkins. Her Temptation series involves an illicit romance between an Englischer girl who attempts to become Amish to be with the love of her life. Forever is the third book in the series. Here, she tells us more about writing her series, and a bit more about herself. Thanks for stopping by! 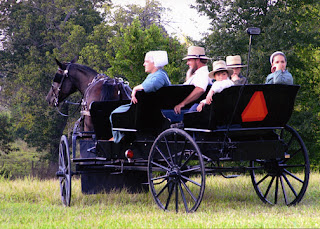 What was the inspiration behind this series?


Six years ago I moved from the Smoky Mountains of Tennessee to a northern Kentucky Amish community. I brought twenty-four horses with me and set up my established horse-back riding business at the new farm. Within a few weeks a stream of Amish teens were coming to the arena to participate in riding activities with the non-Amish kids. Watching the interactions between the two groups, and observing some definite flirting going on, I began to wonder how a relationship between the two vastly different cultures could work out. It seemed impossible and incredibly intriguing at the same time and the seed for Rose and Noah’s story grew in my mind.

What kind of research did you have to do for it?


I dedicated two years to learning as much as I could about the Amish way of life. Besides my observations at the arena, my life was inundated with the Amish culture as Amish girls babysat my younger children, Amish teens hung out with my own teen sons, as I drove the Amish women to town to shop and even took a Tennessee vacation with an Amish family. I attended five Amish weddings and numerous schoolhouse benefits and private dinners with neighbors. When I’d gained enough experiential knowledge, I began writing and a year later, I had an agent and Harlequin Teen had purchased the forbidden love story.

How likely is a story like this in real life?


It’s very likely. I know of two girls in my own community who left the Amish to be with their ‘outsider’ boyfriends. Both girls were shunned by the Church, but still have limited contact with their families. One of the girls is now happily married and neither regrets her decision to become ‘English’. Even though the Amish attempt to live isolated lives, there is always some contact with the outside world and secret romances develop all the time, but because of the huge cultural and religious faith differences, relationships rarely last.

Did you adapt any of the language or storyline to make it a more relatable story for "Englischers" to enjoy?


Yes, I sure did. The Amish are a bilingual people, but Pennsylvania Dutch (a form of German) is their birth language. They will speak English when communicating with outsiders or in the presence of their non-Amish neighbors, but I’ve learned that when they are in their homes or only among other Amish, they tend to speak Pennsylvania Dutch. The Amish learn the language through their families and community and since there aren’t any books teaching it, it would be very difficult for an outsider like me to learn it well enough to incorporate it too heavily in the pages. Although, I do pepper words and phrases throughout the books that are familiar with the Amish culture, I especially paid close attention to the dialect, words and tone that my Amish friends used when speaking English. I believe Rose and Noah’s story have a realistic and sincere feel because of my focus on this part of the Amish speech patterns.

Have you shared your books with anyone within the community?


All of my Amish neighbors know about the Temptation series and many of the teen girls, young women and even a grumpy old man have read the books. One girl who had already left the Amish to be with her non-Amish boyfriend told me she cried through Temptation, because she related so strongly to what Noah was going through. For the most part, the reactions from the neighbors has been very positive, although it’s taboo for them to discuss their children having romances with outsiders and the possibility of anyone leaving the community, so there are those who have shied away from the series.

What is it about the Amish that makes them such a good group for stories?


It really is amazing that hundreds of thousands of people in the United States and Canada, especially in the Midwest, live their lives like those living more than a century ago. They turn away from modern conveniences and technology, oftentimes having many hardships, to live a quieter and highly religious existence. You would think that the population would be dwindling away, but instead, it’s growing by leaps and bounds. The Amish have large families, sometimes as many as ten or more children and many of those kids are remaining in the culture, even after they step out and see the world for a bit. The young people have discovered that the lifestyle that we all take for granted and can’t live without is not all it’s cracked up to be in their eyes. I think the fact that they are so different from us and choose to remain that way, makes them an especially intriguing group. 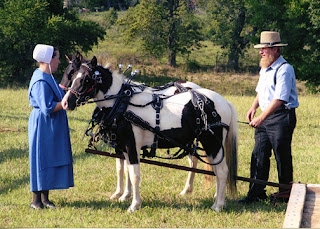 What do you think the draw to Amish literature is for readers?


The Amish are stuck in a strange time-warp, where they see the modern world all around them, yet they reject it. Why do the women put up with the anti-feminist structure of their culture? Why don’t they refuse to do laundry by hand or secretly sneak birth control so that they don’t have to give birth in the double digits? The questions can go on and on and usually infuriate the curious, but at the same time that we’re exasperated by the life choices of the Amish, we’re also fascinated at the stubborn strength of these people. We respect them and want to understand why they live the way they do and what really makes them tick.

What is the draw for writers?


For me, the more I became immersed in the Amish community around me, the thirstier I became for knowledge about them. Some things about their culture infuriate me, while other times I’m humbled by their ways. They are so different from us and so secretive, which makes them a delightful group to write about.

Have you written other Amish books, or have plans for any more? What about any other kind of project?


Yes, I’m excited to say that I’ve written an adult Amish mystery that will be available on Kindle this year! It’s a story about the interweaving lives of three unlikely people in an Indiana Amish Community and the devastating results when a rebellious teenage girl is found shot to death in a corn field during the harvest. Serenity Adams is the newly elected young sheriff in the country town of Blood Rock and besides dealing with the threatening behavior of her predecessor, she now has a dead Amish girl on her plate. At first glance, the case seems obvious. The poor girl was probably accidentally shot during hunting season, but when the elders of the Amish community and even the girl’s parents react with uncaring subdued behavior, Serenity becomes suspicious. As she delves deeper into the secretive community that she grew up beside, she discovers a gruesome crime from the past that may very well be related to the Amish girl’s shooting. Serenity enlists the help of the handsome bad-boy building contractor, Daniel Bachman, who left the Amish when he was nineteen and has his own reasons from his dark past to help the spunky sheriff solve the crime that the family and friends who shunned him are trying desperately to cover up. Serenity’s persistence leads her to a stunning discovery that not only threatens to destroy her blossoming romance with Daniel, but may even take her life in the end.

Who are some of your favorite writers about the Amish?

What do you think of shows like 'The Amish Mafia' and other exploitation of the Amish way of life?


I haven’t watched any of them myself, but I understand why people tune in. The allure of the mysterious Amish way of life is very appealing in a visual format. Unfortunately, these types of reality shows are probably not very honest portrayals of the Amish people and their youth.

What is something readers may be surprised to learn about you?


The only writing experience I had before the Temptation series, were the 4H horse club and farm activity articles that I’d submit to the local newspaper. I never took a writing class in my life and learned the process through trial and error and the wonderful suggestions given to me by professionals along the way.

Is there anything else you would like to add?


Although, the Temptation series has had many accolades and a growing fan base, there are those people who find the anti-feminist Amish way of life very distasteful. From my own experiences, the lifestyle is definitely not my cup of tea, but I can understand whole heartedly how some women would find a life of raising a family in the country with a strong man alongside her who steps up to take on the responsibilities of his family a tempting thing. In the end, it’s about the freedom of choice. I hope that if a reader takes only one thing away from the Temptation series, it’s that they realize how important it is for every woman to make her own decisions about what makes her life happy. It’s just as honorable and worthwhile to be a mother of ten and homemaker as it is to be a highly educated powerhouse career woman.

I love to hear from my readers! Please contact me on Facebook with your thoughts on the series or any questions about the Amish you may have. Thanks!
Karen Ann Hopkins

Thank you so much for your time! 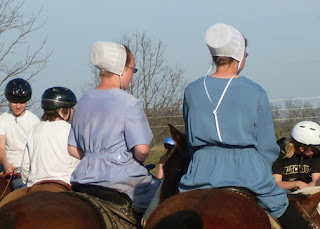 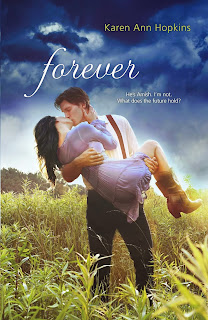 All I want is my happily-ever-after.

From the day we met, the world has tried to keep Noah and me from being together, but now that I'm carrying his child, no one will be able to tear us apart. Or so I hope. But Noah and I have made some mistakes along the way, and the consequences are impacting the people we love. Worse, there's a storm on the horizon, and it's sure to cause serious devastation.

If we can get through this, we'll finally be Rose and Noah; a family, forever.

But first we have to survive the road ahead. And happily-ever-after is a long way off. 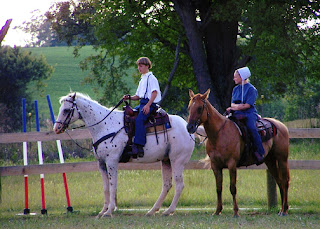 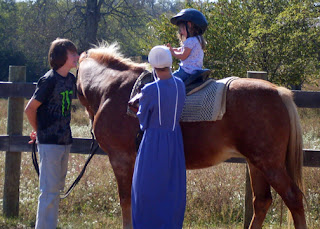 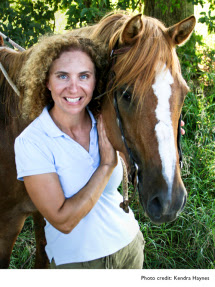 A native of New York State, Karen Ann Hopkins now lives with her family on a farm in northern Kentucky, where her neighbors in all directions are members of a strict Amish community. Her unique perspective became the inspiration for the story of star-crossed lovers Rose and Noah. When she’s not homeschooling her kids, giving riding lessons or tending to a menagerie of horses, goats, peacocks, chickens, ducks, rabbits, dogs and cats, she is dreaming up her next romantic novel.

Contest Info: We have lots of exciting prizes, so make sure to follow the tour for more chances to win every day! Up for grabs is both a $100 Amazon Gift Card and a $50 Amazon Gift Card, plus copies of the following Harlequin TEEN titles: Heartbeat, The Queen’s Choice, White Hot Kiss, Anything to Have You, Secret Diamond Sister and Grim. Please enter via the Rafflecopter form. Giveaway is open to US/Canada. Remember to check out the rest of the tour!
a Rafflecopter giveaway
Posted by Andi at 7:34 AM