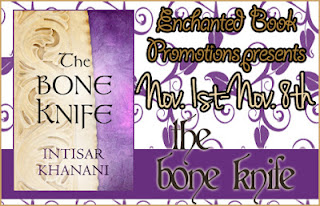 Welcome to the book tour for The Bone Knife by Intisar Khanani, presented by Enchanted Book Promotions! 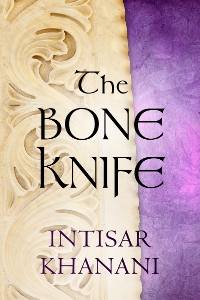 Genre: YA Fantasy, Short Story
Blurb: Rae knows how to look out for family. Born with a deformed foot, she feigns indifference to the pity and insults that come her way. Wary of all things beautiful, Rae instantly distrusts their latest visitor: an appallingly attractive faerie. Further, his presence imperils the secret her sister guards. But when the local townspeople show up demanding his blood, Rae must find a way to protect both her sister’s secret and their guest. Even if that means risking herself.

“What did you mean he’s trouble?”

I hesitate, uncertain of so many things: what to tell her, how to protect her, exactly what I had seen a handful of minutes earlier. Looking over the low mud brick and adobe wall bounding the kitchen yard, it had taken me a moment to understand that the man I saw walking down our drive, a journey bag slung over his shoulder, was not a man at all. It had been there in the impenetrable obsidian of his eyes, the flawlessly sculpted features, the strange paleness of his skin. The paleness alone would have set him apart from the people of our land, but it was the exquisite grace of his movements, the agelessness of his face, that marked him as something other.

Leaning on the wall, watching him, I had forgotten myself: forgotten that young women should beware of the Fair Folk; forgotten that my sister with her life’s secret was within; forgotten, impossibly, my own unremarkable features, my deformed foot. Only as he neared the corner of the house had he glanced at me, amusement in the turn of his lips, as if to say, Did you think I didn’t see you?

This short story serves as a teaser and prequel for an upcoming trilogy, The Theft of Sunlight, which is due in the spring of 2013. The trilogy is a companion to the book Thorn. In this story, we meet Rae, who shows strength of character in spite of her physical deformity. Usually her sisters are the ones who get all of the attention for their beauty and talent. The visiting fae seems to recognize this in her and applauds it as she saves both him and her family from the townspeople. It seems like there are many more secrets being hidden in this family and lots of potential for some great adventures. And for a mere 99 cents, you can't go wrong with checking it out!

Amazon blurb about The Thorn:


Princess Alyrra's strength lies in silence. Scorned by her family, she avoids the court, spending her time with servants. When her marriage is unexpectedly arranged with the prince of a powerful neighboring kingdom, Alyrra feels trapped. As the court celebrates her match, dark rumors spread about the unexplained deaths of the women of her new family. Alyrra begins her journey with mounting trepidation. Betrayed while traveling, she seizes an opportunity to start a life away from court.

Walking away from a prince whom she doesn't know should have been easy. But from the moment she sets eyes on him, Alyrra realizes that her freedom could cost him his life. Without any magical defense of her own, she is plunged into a lethal game of sorcery and deceit. Now Alyrra must decide whom she can trust and what she's willing to fight for--before her silence proves fatal.

What people are saying:

"A troubled princess, an unknown prince, a betrothal, a magnificent white horse, a dangerous sorceress, a wanted thief, magic, mystery, and danger. What more could you want? How about an interesting, in-depth plot that deals with issues such as abuse, grief, justice, loss, pain, revenge, and betrayal? This book has all of these and more." - Vendethiel, Amazon review 7/1/2012

"Princess Alyrra/Thorn is the most engaging main character I have met in a long time. All she wants is to be left alone and yet, when push comes to shove, she does step up and do the right thing. She is humble and compassionate and brave, though she doesn't believe it." - Author Elisabeth Wheatley

"The climax is a bit of a show-stopper, a wonderful outbreak of magical manipulation with everything at stake, and no real certainty of how things will go." - Pauline's Fantasy Reviews 8/24/2012

Readers of Robin McKinley and Mercedes Lackey are sure to enjoy this retelling of the classic Grimm's fairy tale, "The Goose Girl." 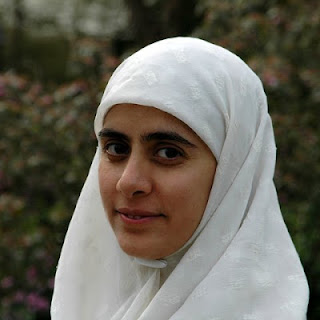 Intisar Khanani grew up a nomad and world traveler. Born in Wisconsin, she has lived in five different states as well as in Jeddah on the coast of the Red Sea. She first remembers seeing snow on a wintry street in Zurich, Switzerland, and vaguely recollects having breakfast with the orangutans at the Singapore Zoo when she was five. She currently resides in Cincinnati, Ohio, with her husband and two young daughters. Until recently, Intisar wrote grants and developed projects to address community health with the Cincinnati Health Department, which was as close as she could get to saving the world. Now she focuses her time on her two passions: raising her family and writing fantasy. Her approach to writing reflects her lifelong love for stories from different cultures. Her next project is a companion trilogy to her debut novel Thorn, with Rae as her new heroine.

Twitter: @IntisarKhanani
a Rafflecopter giveaway
Posted by Andi at 8:00 AM