Fans of YA horror and science fiction, read the excerpt from Reaper: Aftermath and then download your own copy! Be sure to check out the rest of the tour for even more. Best of luck entering the giveaway! 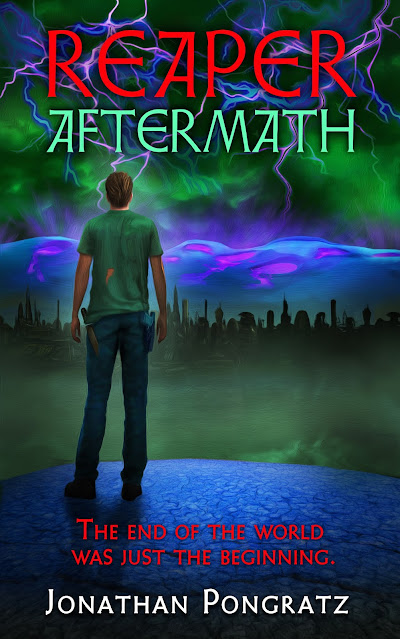 Five years have passed since the Reapers invaded Earth and tore it asunder. Gregory, his mother, Trent, and their group of scavengers hunt the decimated wastelands for survival.

But when a sudden Reaper attack forces Gregory through a Reaper door, he finds himself in a bizarre place, one that may provide answers to the Reapers’ past and where they came from.

Can Gregory put together the pieces of the past and find his way home, or will he just become another human casualty in the lost war against the Reapers?
Read an excerpt:

Inside the grocery store was just as run-down as it was outside. The late afternoon sun did little to illuminate the space, but our flashlights revealed uneven aisles with busted shelves, dirt and litter-caked tile floors, and thick layers of dust everywhere.

There was a foul stench like rotting flesh that I attributed to the Reapers that had been hiding here. They’d most likely come charging out because we’d unearthed their nesting spot, but their bravery to reveal themselves in daylight was still unnerving. I’d never seen that happen before.

Mom had me stay with the noncombatants while she and the other sharpshooters scoped out the store for signs of Reaper offspring. Female Reapers laid large basketball-sized eggs in nasty gray-veined sacs. The slightest sound could awaken them, and they were formidable due to their size and speed.

Luckily, Mom and the sharpshooters came back momentarily and gave us the all clear. She had us split up in pairs of two, and we each took an aisle to stash supplies. I got paired with a mousy girl named Meredith who pretty much lived at the library back home. We rounded the corner of aisle four, canned goods, and I groaned when I saw its meager contents.

Cans sparsely populated the slanting shelves in tiny rows, a few dozen or so on each side. This was it? After risking our lives to get in here? I wondered how much of the food would still be good. Preservatives or not, it had been five hellish years. Nothing was exempt from that.

“I’ll take the right side,” I told Meredith. I walked ahead of her to my side of lopsided racks as I unzipped my large supply bag. I shone my light on the first can I saw. Sliced Beets. I recoiled. Grandma food. I begrudgingly threw the can and a few identical ones behind it into my bag, then moved on to the next row.

Dinty Moore beef stew. I chuckled to myself. More like dog food. After a couple minutes of scrounging I was done with my side, and boy was it depressing. Turnip greens, diced rutabaga, menudo. What the hell happened to carrots and green beans, peaches and pineapple? I didn’t even want to think of what monstrosities the cooks would make out of this stuff back home.

I glanced back at Meredith. She was looking over the cans meticulously, taking her time before placing each one in her bag. Geez, what was her damage? Our job was simple; put the goods in the bag and go. At her speed, we wouldn't get out of here until nightfall when the Reapers came out in droves.

I tried waiting for her, but my patience wore out. In my frustration, I noticed the back aisle of the store. Several rows of knickknacks laid virtually untouched, and I weighed my options.

What was the harm? The others weren't that far away, and with Mom's birthday just weeks from now I had to find a present for her. I walked ahead in slow cautious steps, entering the back aisle. No one else was here. In front of me and panning to my left were the racks of trinkets I’d seen. This side of the aisle ended in a back room separated by tall, thin sheets of plastic. To my right was a freezer section. Whatever was in there had long since spoiled without electricity.

I rummaged through rows of untouched doodads, clouds of dust rising as I went. Most of it turned out to be junk: small stuffed teddy bears, fake jewelry, pinwheels, and other cheap crap. When I unearthed a small globe-shaped object, I didn’t want to get my hopes up, but as I brushed it off I couldn’t help a small squeal of excitement.

Mom always had a fascination with snow globes. I guess she just thought they were beautiful. This one said Billings, Montana and had a small, insignificant skyline. When I shook it, little flurries inside stirred to life. I smiled. She was going to love it.

I set my supply bag down on the ground, shuffling cans around to make room for the trinket down below so no one would see it. As I sorted through my supplies, one of the cans fell out and rolled down the dirty tiled floor to the entrance of the back room before settling. I groaned to myself and walked over before picking up the can. Sliced beets. I shook my head and chuckled. Fucking beets, man.

Suddenly, all the hairs on my body stood on end. I jerked my head up just in time to see a tall dark silhouette lurking behind the thick lines of plastic. Fuck, fuck, fuck!

As I backed away, the Reaper emerged from the back room into the aisle. This one was just like the other two we’d killed, boils, teeth, foul odor, and all. But unlike before, there was nothing between it and me.

“Reaper!” I spun around and bolted, only to catch my feet on my own supply bag. I went plummeting to the ground, cushioned by trash and dirt.

The monster gave a horrendous howl of rage just feet away, and I scrambled forward futilely. It was all over. At this range, there was no way I could esca--

Several thunderous gunshots sounded ahead of me, followed by a wail of pain from the Reaper. I looked up. It was Carlos, one of the only noncombatants with a gun.

“Get behind me!” he shouted.

I double-timed my crawl to him as he fired several more shots at the Reaper, the last one ending in a click from his gun. Carlos’s face went white. Oh shit, he was out of bullets! I closed my eyes in defeat, expecting the Reaper’s long claws to rake into my back and through my body at any moment. Instead, all I felt was a rush of air as the Reaper leaped over me and charged Carlos.

He punched and kicked fruitlessly as the Reaper grabbed him and lifted him into the air. It gave a hideous screech as it shoved Carlos headfirst into the glass door of the refrigerated section, keeping its grip on him. As it removed Carlos, I fought the vomit that lurched up my throat.

Large glass shards embedded in his face jutted out in all directions, blood flowing freely from each wound. He gave a gurgled cry before the Reaper threw him down to the floor.

Loud footsteps echoed closer to us.

As Mom and several others entered the aisle, the Reaper lifted its razor-sharp claws, bringing them down on Carlos.

A deafening hail of bullets pounded all around me. I sank to the ground, covering my ears and closing my eyes until the carnage quieted. When I opened them again, the Reaper was in front of me, lying on the floor in a pool of its own black blood. As I set my eyes on Carlos, I gaped in horror. We were too late. Carlos was dead.

Jonathan Pongratz is a writer and author of captivating horror, fantasy, and other speculative fiction stories. When he’s not writing, he’s busy being a bookworm, video game junkie, and karaoke vocalist. A former resident of Dallas, he currently resides in Kansas City with his Halloween cat Ajax. By day he works magic in finance, by night he creates dark and mesmerizing worlds.

Jonathan Pongratz will be awarding a 15 Amazon or B/N GC to a randomly drawn winner via rafflecopter during the tour.
a Rafflecopter giveaway
Posted by Andi at 3:30 AM