Welcome to the book tour for Piper's Song by Sara E. Tall! Today we have a great guest post, where character Sedna Nightlock tells us all about Sara. It's a pretty good roast and a lot of fun to read. You'll also get to check out an excerpt before you download your own copy. Then be sure to follow the rest of the tour for even more fun. Best of luck entering the giveaway! 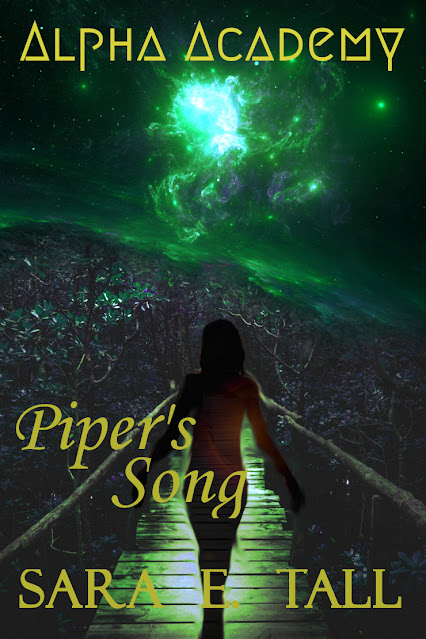 Billie thinks stopping her fellow students from committing murder and almost getting kicked out of the Realm is as bad as it gets, but she should know better. Not only are seven of the most powerful students out for her blood, but Sedna —her former enemy turned ally— turns her enemy again when Billie refuses a part in her revenge scheme. What’s more, Alpha Administration’s refusal to address the injustice in their school is sparking a full-on rebellion, and a lot of innocents are going to be caught in the crosshairs. It isn’t just the school either, the Realm itself is overrun with violence and hatred, which will have deadly consequences. Lucian, her self-imposed magical guru, insists Billie’s extraordinary magic is the key to stopping the flood of violence coming their way. Billie knows her magic is extraordinary, but she also knows its destructive power. It might do more harm than good.
Read an excerpt:

“Leave her alone.” The words were out of my mouth before I could stop them. It took about a half a second for everyone’s eyes to swivel towards me, Sedna’s included. She looked like she wanted to tear my limbs off, one by one. I gulped.

And then she chuckled. “Billie, the hero, is here to save the day.”

I ignored the flush in my cheeks as I said coolly, “We both know she’s not the one you are mad at.”

And just like that, the smirk slipped off her face as her glower returned, like my candor had reminded her how much she hated me.

“It’s really cute how protective you are of your roommates,” she said coolly. “There’s one you might want to be a little more concerned about. She’s in the hospital. Her name is Artemis.”

I could swear my temperature dropped at the icy way she said Artemis’ name. I also couldn’t stop myself from looking down. My voice was small as I said, “I’m sorry for what—”

“Don’t,” her voice sliced through mine like a knife, “you dare apologize to me.”

For a moment, I really thought she was going to tear my limbs off, but she seemed too angry to move. No one else dared move either, even her friends. They just stared between the two of us, waiting to see who would break first.

It was me. “You want to pick a fight with me, fine.” I lifted my chin, trying to look more confident about that statement than I felt. “But leave her out of it.”

Available on Amazon
(affiliate link)
Just $0.99!
From Sedna Nightlock of Piper's Song:
Hey humans. My name is Sedna Nightlock, and I’m a Warlock currently in her senior year at Alpha Academy. My role in Piper’s Song is … not what you would expect when you meet me at the beginning of the story, but what can I say? I like to keep things interesting

For some reason Sara has chosen me to describe her, even though she knows I won’t say nice things. If I were five years older she’d totally have a thing for me. Isn’t that adorable?

Now, how would I describe Sara? She’s on the naïve side so it’s really entertaining when she tries to write someone as woke as me. It usually takes her a few tries, but eventually she gets it right. She does love to create characters so she usually ends up with a large cast. She still manages to shine the spotlight on the more important ones, like yours truly. That being said, I deserve more screen time(page time?) than I get. I keep telling her I should get my own spin-off series, but she won’t listen.

When it comes to writing, she really needs to cool it with the forbidden romance and unrequited love triangle thing. I might be the only character in the book who’s not bogged down with that stuff, but that’s just because I’ve got way more important things to do. Like starting a rebellion.

Her insane obsession with playlists can be a little annoying, albeit entertaining. For example, she spent an hour updating the playlist of a character that was closest to my personality so she could listen to it while writing this. It was insane, though I do have to agree with a lot the music choices. It’s a lot of Led Zeppelin and fem power songs.

Another thing. She’s become obsessed with whiteboards. Sure it beats wasting all that paper and killing trees but she’s constantly updating all her little goals on that whiteboard and making sure every little event is on her whiteboard calendar. What a nerd.

Though speaking of nerdiness, wait until I tell you this. She’s obsessed, like OBSESSED, with Batman comics. Pretty sure she’s in love with this character named Jason Todd, who was a former Robin who decided to break the one superhero rule of not killing and is now an actual interesting character with a personality. Anyway, she writes a ton of fanfiction for Batman and other DC comic books. She also writes Harry Potter fanfiction. The girl needs to get a life, am I right?

Alright, Alright, so she does get outdoors and go skiing, hiking, and road trips through the US. She also does this thing where she works in Yellowstone every summer, world pandemics permitting. And the dancing! People are always surprised when the find out she used to be a club rat(Another relic of the pre-pandemic world). Now she gets her kicks in by dancing down the aisles at grocery stores and having raves in her living room, by herself. You’d probably think with all that practice she’d actually have some decent moves, but you’d be wrong. Still, she doesn’t let that stop her.

Oh, I remembered another thing to add to the nerd list. Board Games. She plays them all the time. Usually with her family and cousins which is really sweet, but still nerdy. I don’t know why she doesn’t just play video games like a normal person. Oh wait, actually I do. It’s because she’s too intimidated about buying all the equipment since she never has before, and rather than ask for help she’s just decided to avoid that particular time-wasting activity. Don’t worry. She’s got plenty of other time-wasting activities. Like rewatching Buffy: The Vampire Slayer for the fifty billionth time.

Maybe I am being too hard on her. After all, she did create me. And I’m a version of one of her absolute favorite characters, meaning regardless what happens to me in Piper’s Song, I get to live on in her other stories. I’m basically immortal. Which is good, because Piper’s Song has some dark things in store for me.

Well, that’s a wrap. I actually enjoyed this more than I thought I would. Roasting your creator is fun. But like I said, I’ve got things to do. Societies to crumble, schools to burn down, revolutions to start, obnoxious, self-righteous, over-powered Misfits to circumvent. It’s going to be an exciting year. 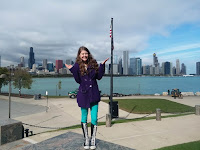 Sara’s enjoyed creating fantastic stories since she was old enough to hold a play sword, around the time she learned how to walk. Gradually she learned to direct her creative energy into writing, and it’s been a downward spiral ever since then. When she’s not writing she’s probably either dancing or reading batman comics. She also loves running away to the mountains of Utah and Montana. Nothing gets more fantastic that those views.

Sara E. Tall will be awarding a $15 Amazon or Barnes and Noble GC to a randomly drawn winner via rafflecopter during the tour.
a Rafflecopter giveaway
Posted by Andi at 3:30 AM