If you love fantasy and adventure, you need to check out this excerpt from Coliseum Arcanist by Shami Stovall! Follow the tour for even more and let the author know what you're thinking along the way. Best of luck in the giveaway! 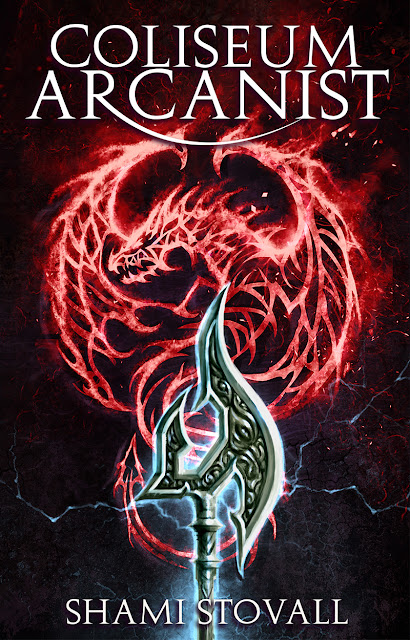 Adventure. Competition. A duel to the death.

While on a journey to the famous city of Thronehold, Volke Savan learns of the Sovereign Dragon Tournament. The massive celebration involves hundreds of arcanists competing for fame and glory, and Volke is determined to win.

Dark forces dwell in the city, however, and rumors of the legendary world serpent spread amongst the shadows. Whoever bonds with a god-like mystical creature will gain magic beyond compare, and the queen’s guards suspect cutthroats will use the chaos of the tournament to hide their plotting.

Unsure of who to trust, Volke investigates the terrible rumors while advancing in the ranks of the tournament. Unfortunately, the true villain may be closer than he realizes…

Continue the Frith Chronicles with the third book, Coliseum Arcanist!

Praise for the Frith Chronicles!

Once Zaxis had dressed, we descended the long staircase to the ground floor. Forsythe flew ahead of us, since he hated walking and Zaxis said he was too big to carry. He made it to the library long before we reached the halfway point. I wore my long coat, leather boots, and thick belt—a buccaneer’s outfit, like most individuals who traveled long distances on a ship—but Zaxis had gone a strange route.

He wore no coat and instead pulled at the edges of the shirt I had given him. It was too small, even though I was a few inches taller. The shirt technically fit, though it stretched tight across his chest and biceps, strained by the new muscle. Zaxis tried to adjust the fabric, but nothing worked.

And instead of one belt, he had two—one to hold his trousers, and the other to hold a leather pouch and his new gloves.

The lax style made him seem more like a thug than a professional, but his bronze pendant eliminated doubt. Pirates and cutthroats didn’t adhere to the guild system of identification.

Before we reached the library, he placed a hand on my shoulder. We stopped, and he stared at me with a half-serious, half-flustered expression, like he didn’t want to speak, but couldn’t stop himself.

I lifted an eyebrow, tenser than I had thought I would be. “Okay.”

“The problem is—she talks about you. A lot. It gets annoying.”

“We did grow up together. And none of the other kids associated with us much.”

Zaxis huffed and then pulled me close. “I thought you said you would help me get in her good graces.”

Shami Stovall is a multi-award-winning author of fantasy and science fiction, with several best-selling novels under her belt. Before that, she taught history and criminal law at the college level, and loved every second. When she’s not reading fascinating articles and books about ancient China or the Byzantine Empire, Stovall can be found playing way too many video games, especially RPGs and tactics simulators.

If you want to contact her, you can do so at the following locations:


Shami Stovall will be awarding a $25 Amazon or Barnes and Noble GC to a randomly drawn winner via rafflecopter during the tour.