Read an excerpt from The Heart of Aleppo by Ammar Habib 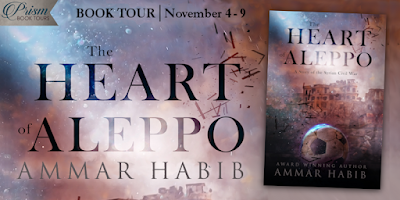 Welcome to the book tour for The Heart of Aleppo! I have an exclusive excerpt from the book for you to enjoy today. Please be sure to follow the tour for even more. And of course, enter the great giveaway at the end!

The Heart of Aleppo:A Story of the Syrian Civil War

From the ashes of the Syrian Civil War comes this story of hope, love, and courage...

After standing for over 7,000 years, Aleppo's ruin came overnight. Separated from his family during the night the rebels attacked the city, thirteen-year-old Zaid Kadir is lost in the middle of a war zone. Alongside his friends, he is forced to survive the dangers of a civil war he does not even fully understand. Zaid witnesses the destruction of the brutal Syrian Civil War as it grows more deadly by the day and rips his city apart. However, as he braves this destruction, as he desperately tries to survive this catastrophe, he discovers something. Zaid realizes that it is in the darkest hours when humanity's spirit of hope burns brightest.

He takes a deep breath and glances down at my feet. His eyes look like he’s weighing something, wondering if he should say it or not. When he does speak, his voice is different. It’s no longer speaking to me as his younger brother but as his friend. “You know, Zaid, Zakariah was joking about what we were talking about.”

He nods before his gaze focuses back on me. “Not even a few weeks ago, my soldiers and I were in a bit of a… well, situation.”

“We were in Homs. The people we were fighting—the rebels—had heavy control of some neighborhoods. We were trying to take them back. It was…”

A silence ensues as he searches for the word.

“Difficult.” Nabeel pauses. “Some soldiers were pinned. The army tried an airstrike to break the rebel lines. It was a heavy bombardment that leveled entire streets. The cost was high. But we couldn’t break their lines.”

I don’t interrupt him.

“Our intelligence said it was a lost cause. We were ordered to abandon the soldiers. They said we would lose more men than we would save. But even the army’s ‘intelligence’ doesn’t know everything.” He looks away. “Zakariah and I disobeyed our commanding officer. As did our men. Those soldiers that were pinned weren’t just men. They were my friends… my brothers. And I would never abandon them, even if it led to…”

For a moment, his eyes again display that same gleam, but it disappears as quickly as it came.

I hang on his words, unable to say anything.

“Because… I don’t want to see people suffer. I… I want to be the one to help others. I want to save lives, make a difference and put others before myself. I want to make this world a better place. Just like the Imam always talks about.”

Nabeel smiles. “Never forget that. And never go back on your word. No matter what happens. Please never forget one thing, Zaid: I love you. No matter the circumstance—no matter if I’m so far from you that you may never see me again, know that I’m with you.” He presses his finger against my heart. “I believe in you, Zaid.”

Ammar Habib is a bestselling and award-winning author who was born in Lake Jackson, Texas in 1993. Ammar enjoys crafting stories that are not only entertaining but will also stay with the reader for a long time. Ammar presently resides in his hometown with his family, all of whom are his biggest fans. He draws his inspiration from his family, imagination, and the world around him.

One winner will receive a signed copy of Habib's national award-winning novel, Memories of My Future (US only). Memories of My Future is an historical/inspirational novel that was published in 2016. It received several accolades after its release, including the Independent Press Award in May 2017.