'A Lion's Pride' by Alyssa Rae 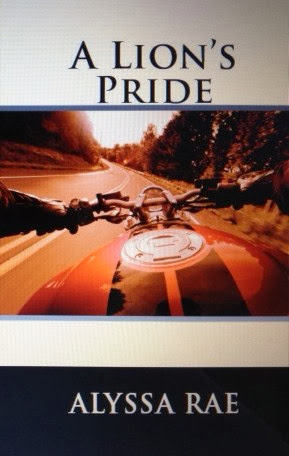 Alex is no ordinary girl. Her parents have been murdered. Her town is under siege. She finds herself raising her sister under the watchful eyes of her father's biker club-The Fu Lions. Now a target, caught in the crosshairs of a rival club-The Reaper's Sons. Alex struggles to find her place among the Lions to protect her sister, her town, and her pride.

The rope was tight around her wrists, rubbing the skin raw and cutting off the circulation in her hands. It was nighttime now; darkness flooded into the locked room. She retied the loose strings on her sneakers, grateful that she had been smart enough to put them on that morning and wishing that she had taken the time to put on a pair of socks too. She woke to a day that felt like a dream, but the dream had quickly faded into a nightmare.

She closed her eyes, but sleep was impossible. She tried to recall as many details as she could about where she was. The ride here wasn't long, maybe 20 minutes, which meant she couldn't be that far outside of town. She was driven here in the back of a gray, windowless van. When the van stopped, she was pulled out so fast she could barely take in her surroundings. She was able to catch glimpses of a log cabin, situated off the main road and on the outskirts of woods.

There were at least 10 men on guard at the cabin; it had taken six to bring her here: three on motorcycles, two in the van and one that didn't make it back. The man who rode in the back of the van with her tied her wrists together tightly with rope and left his gun pointed to her chest for the entire ride. When they arrived at least four more had been waiting at the cabin. Each man was heavily armed, carrying a machine gun in his hands, a 9mm holstered under their jackets, and she was willing to bet each one of them had a knife hidden somewhere on their person. Some of the men looked familiar to her, which was no surprise. Before they managed to lock her in this room, she heard one of them mention more would be coming later that day. A small army guarding a log cabin and a single twenty-something year old girl; it seemed ridiculous, but in reality it wasn't. The men knew the kind of friends that she had, and knew they would be coming for her, and fast. They had been smart to prepare.

But the men had made one crucial mistake when bringing her here; no one had thought to search her pockets when they grabbed her. She always carried her father's pocket knife wherever she went. The knife had been in her shorts pocket when the men picked her up, right next to her cell phone which she knew her friends were tracing now or would be soon. The second the men left her in this locked room she jumped into action. One of them would realize the mistake and would come back to check her. She had to hide the knife and the phone before they did.

The room was made entirely of wood, the inside walls matching the log cabin's outside walls, with hardwood floors. The room was bare with no furniture and no place to hide. She quickly got down on all fours and crawled on the floor, testing the floorboards with the hope that one of them would be loose. As quietly as she could she ran her hands along the floorboards closest to the walls testing for weaknesses. She was running out of time. Finally she spotted a floorboard whose seam did not match the seam in the wall. Gently she tried to lift the board up, but it was nearly impossible to move with her fingers. She took out her knife and shoved it into the crack. She wiggled the knife until she was able to pop up the floor board. The board made a loud creak as she lifted it, tearing it from the original seam, and ripping it apart from the board next to it. She paused to make sure no one heard her before she did anything else. Afraid she wouldn't be able to lift the board up again without the knife, she sawed at the edge with the knife, leaving a gap big enough to fit her finger, but small enough to not be noticed. She dropped the phone and knife underneath and then fit the floor board back into place.

She sat down in the opposite corner of the room across from the door, hoping that she would be able to keep their attention away from the cracked floor board where she hid the phone and the knife. This was the best she could do for now. Moments later the door to the room opened again and one of the men from the van walked in. He grabbed her wrists and pulled her up off the floor until she was standing in front of him. The man smirked as he began to run his hands over her clothes checking all of her pockets and even inside her shirt. She had been right about hiding her phone and knife and had managed to do it just in the nick of time. The man continued to smirk even after he was finished. He stood facing her, his hands holding her tied wrists that were already bleeding from the tight rope.

"I could have protected you," he said. "You never gave me a chance."

She didn't respond, instead she stared him down, never breaking eye contact. He was a big man and she knew she had no chance of overpowering him. Even if she did manage to bring him down, there were still nine more outside the door. No, she would wait; her time for revenge would come. Her cell phone was on. Her friends would know her location in just a few hours. They would find her, he would find her, and then they would come for her. She only hoped they wouldn't be too late.

Available in ebook and paperback on Amazon

Alyssa Rae is a creative writer and piano teacher who was born in New England. She currently resides in a small historic town in North Carolina. A Lion's Pride is her debut novel. She is currently working on her second novel and has several other works in progress, stay tuned!