The Prophecy Series by Michael A. Rothman 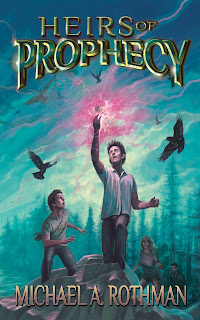 The Riverton family had been enjoying a simple summer vacation when, through a fluke of nature, they found themselves in a strange new land.

The Riverton brothers quickly realize that in this world, they have gained unusual powers. Powers that their parents fear will attract the attention of Azazel himself – the merciless wizard who brutally controls this world.

The two brothers soon learn that an ancient prophecy has finally been initiated by their arrival in Trimoria. As the heirs of this prophecy, they are destined to lead the armies of men, dwarves, elves, and even a misfit ogre against the prophesied demon horde.

Only one thing stands in their way.

The evil wizard who has learned of their presence, and has sent assassins to wipe them from existence. 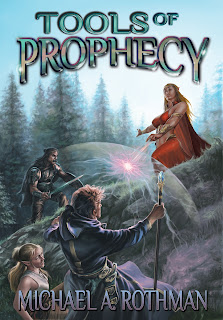 The TOOLS OF PROPHECY is the second volume in an epic saga which describes a prophecy that has placed the Riverton brothers in the lead roles of a struggle to save their world from being overrun by unspeakable horrors. This destiny requires that they face off with the demons that nearly destroyed their world over five centuries ago.
In the first book, the population of wizards had been practically eradicated by the former tyrant. The Rivertons are now charged with creating an Academy of Magic, recruiting qualified students, and furthering their own training with secrets that have long been held by the reclusive elves.

Despite their youth, a mysterious spirit has engaged them in an epic struggle to gain mastery of their newfound skills, help raise and train two armies, and stay alive long enough for their final showdown with destiny.

The only things that stand in their way are the assassins hired to destroy them and the Demon Lord’s minion who holds a personal grudge and intends to witness the young boys’ deaths.. 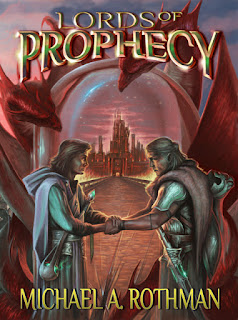 The Riverton brothers have completed their training, and despite their own personal skills, they worry about the forces arrayed against them. Knowing the barrier that’s kept the people of Trimoria safe for over five centuries is weakening, the brothers ready their ragtag army of humans, dwarves, and elves for battle.

In the meantime, on the other side of the ancient barrier, a growing army of demons have readied themselves for the final battle against the people of Trimoria.

As the barrier weakens, Ryan is struck by bouts of debilitating madness. As the barrier crumbles, so does the hope of Trimoria’s citizens.

I am not usually a fan of fantasy books, but I decided to check out this series. I am so glad I did! It is an epic tale of a family that gets lost in a new land after a chance earthquake, only to arrive with new powers they knew they had, and are heirs to a prophecy that must be fulfilled. I was actually drawn in from the very beginning of the first book, and found myself reading while making dinner and staying up way too late. There is plenty of action and intrigue. You may even find yourself educated in some ways that can help you in the real world. I think even some middle grade readers will enjoy this, all the way through adults.

I am an Army brat and the first person in my family to be born in the United States. This heavily influenced my youth by instilling a love of reading and a burning curiosity about the world and all of the things within it. As an adult, my love of travel allowed me to explore many unimaginable locations. I participated in many adventures and documented them in what will be a series of books, the first of which you have just read.

Some might put these books in the Fantasy genre, and I never had issues with this label. After all, the adventures were, without any doubt in my mind, fantastic. I simply quibble with the label of “Fiction” that some might put on these tales. These tales should be viewed as historical records, more along the lines of a documentary

I’ve learned one thing over the years. Magic is real. Keep exploring, and you too will find your magic.
Posted by Andi at 7:19 AM