Literal storms come crashing into Earl's life while also inspiring emotional storms with family, within himself, and with the boy next door. Read an excerpt from Summer Storms and then follow the tour for more. Best of luck entering the giveaway! 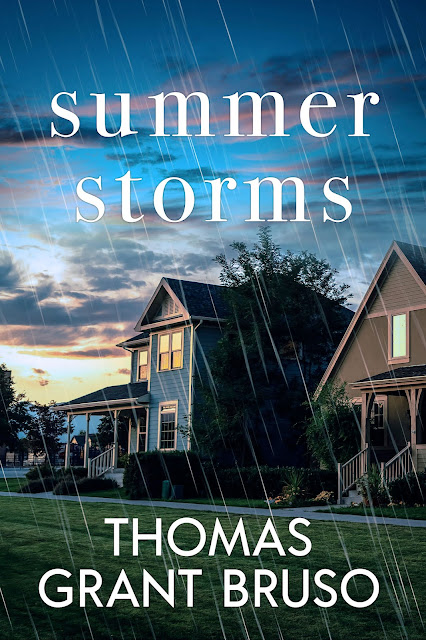 Sixteen-year-old Earl Layman is going stir-crazy. Secluded with the flu inside the four walls of his home and only the escape of his video games to help him through, Earl is struggling to keep his sanity.

That is until he notices the boy next door, seventeen-year-old Rex Chambers, raking leaves in the adjacent yard.

Earl’s summer is about to change. Before another torrential rainstorm hits the small upstate New York town of Betham County, they meet during an awkward cell phone exchange. As they start to connect through occasional texts, Earl and Rex enter the throes of adolescent lust.

In the early stages of forging a lasting connection, their family situations threaten to destroy all they are working for.
Read an excerpt:

Now, on this morning in early May, Earl’s thoughts returned to his past. He stared at the photos wedged beneath the glossy plastic sheets of film in the photo album.

He took a breath as he turned through pages of smiling faces—his family members in various pictures. He smiled back, deep in thought, tears falling and blotting the top of the album.

A rattling of glass bottles jarred his concentration, pulling him out of his momentary trance. He set the photo album on his bed and went to the window, gazing out into another sweltering day. Though gray clouds buckled beneath a darkening May sky that promised another rainstorm, the air was thick like clam chowder.

He was at home, sick from school for the third day this week, if his fever didn’t break. Earl had been bedridden with nowhere to go. He checked his cell phone for messages—from anybody. He missed human contact from his class friends, especially his best friend, Andy Gelman.

Traffic hummed along on the main artery of Betham County, a street over, and Earl caught a glimpse of a woman walking her dog. A young bicyclist pedaled to class. And the boy next door, Rex Chambers, on whom Earl had a small crush, bagged recycling for weekly pickup. Rex looked up at him, waved, and smiled. “Mornin’.” He placed the recycling bin by the side of the street and ambled to the fence separating the yards.

Earl’s face flushed; his skin tingled. Maybe it was the flu, or he was just feeling embarrassed. Shy. Staring at the cute guy who rode his mother’s motorcycle to school every morning this year made Earl light-headed.

“Cat got your tongue?” Rex yelled up from the neighboring yard, pulling the motorcycle away from where it was leaning against the fence and reaching for the helmet hanging on the handlebars. “You need a ride to school?”

Rex tossed the black Darth Vader–like helmet back and forth in his hands like a basketball. His dark hair was slicked with a generous amount of gel, and his angelic eyes and chiseled face set the cogwheels in Earl’s rusty thoughts in motion. “I haven’t seen you around this week. Where’ve you been?” Rex asked.

Earl grinned back at the tall, handsome boy. Was Rex keeping track of how many days I’ve been out of school? “I’m sick.”

Earl nodded, lifted a hand to wave. “See you around.”

“If you need anything, let me know.”

Earl bit down on his bottom lip. He couldn’t believe the boy next door had talked to him; he did not know Rex well. They didn’t talk every day, and when they passed each other in the hallway at Betham County High, Earl was too nervous to speak to him or engage him in conversation. He’d smile at the gorgeous guy, but it was a brief moment in his long day. A fleeting exchange of waves or grins, and both young men went their separate ways. The only class Earl and Rex shared was study hall. But by ninth period, Rex usually ditched the boring forty-five-minute class to take off on his motorcycle and ride around town.

“Feel better!” Rex yelled up to him. He put the helmet on, swung his leg over the cycle and started the engine. “I’m off! Another boring day at Betham County High.”

Thomas Grant Bruso knew at an early age he wanted to be a writer. He has been a voracious reader of genre fiction since he was a kid.

In another life, he was a freelance writer and wrote for magazines and newspapers. In college, he was a winner of the Hermon H. Doh Sonnet Competition. Now, he writes book reviews for his hometown newspaper, The Press-Republican.

He lives in upstate New York.

https://twitter.com/thomgrantbruso
Thomas Grant Bruso will be awarding a $10 Amazon or B/N GC to a randomly drawn winner via rafflecopter during the tour.
a Rafflecopter giveaway
Posted by Andi at 4:00 AM