Read an exclusive excerpt from Shakespeare Burning by Charisse Moritz

Reviewers are raving about Shakespeare Burning by Charisse Moritz. Get an idea of why with this exclusive excerpt. And then follow the tour to read even more before you download your own copy. There's also a great giveaway at the end! 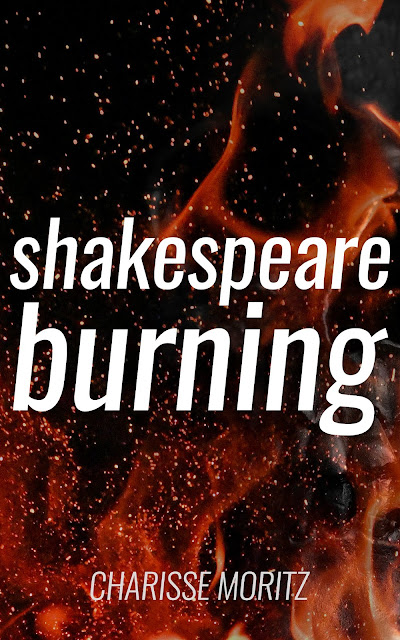 He’s the boy who wants to disappear.

One mistake and seventeen-year-old Shake LeCasse lost everything. Now there’s no going back and no way to move forward. The once-popular Varsity hockey captain is living in the basement of a grandmother he barely knows, ditching school, avoiding friends and working hard on self-destruction.

She’s the girl nobody sees.

Cleo Lee survives however she can. Lie, cheat, steal, whatever it takes, and saving Mr. Popular isn’t part of the plan. Telling him the truth about the night that destroyed his life is downright dangerous. She needs to keep quiet, be smart and let the guy she’s been half in love with since middle school throw away a future she’d do anything to have. Too bad she sucks at playing it safe.

Who is this chick?

When I push through the jingle of the door, Cleo is waiting, leaning against the building, smoking a little stub of a cigarette. Why is she suddenly everywhere? I wonder if she followed me.

“I need toothpaste,” she tells me.

I just look at her.

“You owe me, Sasquatch. I got you home last night.”

I don’t want to think about last night. Not the least little bit. I don't know what the hell happened, but I'm treating it like Vegas.

She steps in front of me and says, “Is it a lot of work being such a giant dick? Like, do you take special classes? Practice in the mirror? Wear a rubber on your head? Cuz as a giant dick, you’re downright impressive. Maybe even one of the biggest dicks I’ve ever met. Can I get your autograph?”

I tower over her, give her my meanest scowl and lower my voice, “Get lost.”

"Is this when I wet myself because I'm so scared?" She even makes her eyes all big and shivers with her hands up. All ninety pounds of her and I consider just trampling her, but she’s like one of those little ankle-biting dogs and won’t quit. I settle for an eye roll and head back inside.

To the guy behind the counter, I mumble, “Forgot something.” Within three minutes, I’m back on the sidewalk.

I hold out the bag, wait for Cleo to reach, then jerk it upward. She jumps, but I’m a head taller than the rest of the population and she’s not allowed on the big girl rides at the amusement park. I enjoy watching her jump. I’m acting like a dick BECAUSE she accused me of being one. I don’t know what that says about me.

When she tries to kick me, I shield my junk and toss her the bag. “You owe me a dollar and fifty seven cents.”

She snags the toothpaste and drops the plastic bag on the ground. “I said travel size. I can’t hide this. Rex’ll steal it in five fucking seconds.”

“Dude, I’m tapped.” She wiggles her fingers. “There’s a reason that assbag doesn’t want me in his store.”

Who is this chick? What have I done to snag her attention? How do I get rid of her?

I walk away. She trots after me. She carries a brown lunch bag. It would almost be worth making nice if she’s got food in it. My stomach growls just thinking about it.

I finally say, “I want my shirt back.”

It’s the only shirt I’ve had longer than eight months. It’s the shirt I had on the night IT happened, and I can’t bring myself to wear it or throw it away. She must have dug to the bottom of my everything to find it. Seeing her in it kills me a little bit.

Emily Award Finalist and Melody Of Love Award Finalist, Charisse M Moritz divides her life between upstate NY and northern Florida. When not barricaded inside her writing cave or enjoying every possible minute with her husband and three kids, you’ll find her listening to 60’s music, singing offkey and looking for new reads.

Charisse Moritz will be awarding a $20 Amazon or B/N GC to a randomly drawn winner via rafflecopter during the tour.