It's time for a new YA sci-fi dystopian romance! Haley Cavanagh has just released her latest book, Retaliation. You can read an excerpt here today before you download your own copy. Be sure to also follow the rest of the tour and then leave the author comments and questions along the way. Best of luck entering the giveaway plus the bonus giveaway! 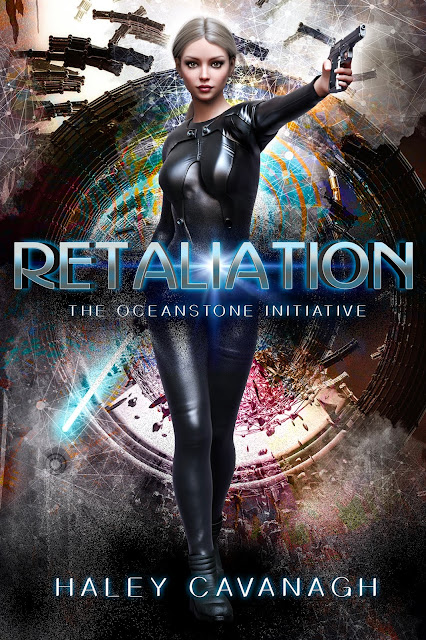 Sakota saved Astraeus and her friends from certain death, but in doing so, she gained the attention of the Oreck, who will stop at nothing to destroy everything in their path. With their ship severely damaged, Sakota and her crew land on a nearby planet and seek sanctuary while they make repairs to return home. But nothing on this perfect planet is as it appears, and Sakota soon learns they've traded one danger for another. Hunted and targeted, will Sakota be able to carry out her mission, or will everyone she cares about be destroyed?

Sakota bolted up in bed in the middle of the night.

Her dreams of blood and fear were monopolized with pointed teeth, cartilaginous faces, long, double-jointed arms and legs, and cruel, black alien eyes. The Oreck. They haunted her, perpetual alien God-ghosts with their eerie, electromagnetic glow beneath papery, gray skin.

Beside her, Astraeus slept, his arm flopped over the groove in the bed where she’d lain as he held her. He stirred, frowning. Was he having a nightmare too? She reached her hand out and searched with her emotions, as she’d learned to do.

He tossed, fitful, in the clutches of a nightmare to do with Upsilon’s destruction. She couldn’t remember what her nightmare had been about, but it had ended violently. Peace, she sent silently. Tranquility . Calm . Rest .

Astraeus sighed in his sleep, relaxed, and rolled over. She feathered hair out of his face. His existence had blown her away, and it still did. Astraeus’s genetic code far outstripped her own. He had defense mechanisms in place to protect him from climate extremities that she could never even dream of having. But more so, for the first time in her life, she’d fallen in love. It went against her pragmatic nature, but his comforting presence anchored her amid the wreckage.

She scrubbed her face with her hand in the darkness and swung her legs over the side of the levitating bed, careful of the bed’s height when she stood.

Humans were either a lot shorter than most of the visiting interplanetary delegates, or for some strange reason, they liked their beds high.

Her limbs ached, fatigue from the action of the last several days. She suspected healing from microgravity had something to do with it too, but she’d been through the wringer. The way she walked, the weight of her lips when she spoke, her arm and leg muscles seemed heavier and more visceral, like someone had injected them with a heavy drug. Ridiculous, of course. She was in the best shape of her life.

In the center of the room, she stretched and did some yoga until the tightness lessened. She rotated her neck. In a day or two, the slight dizziness and disoriented inertia would subside. As a physician, she knew the symptoms. She’d be fine. But telling a patient about them versus experiencing them were two different things.

She padded barefoot out onto the balcony, drew a silver cup from the shelves, and dipped it into the fountain. Distant light illuminated the Chuleron buildings along the skyline in the distance. She brought the brim of the cup to her lips and drank. Cool and refreshing, much cleaner than the sterilized water she’d had back on Earth. Tastier too. Earth water had to be purified at least five times before it could be considered healthy enough for consumption. Bacterial pathogens ran rampant in food and the polluted streams and springs back home, so sterilizing was essential. The delightful coolness soothed her throat.

She twisted her hair and pulled it over her right shoulder, taking in the strange, tantalizing city. Did her suspicions about this place come from her subconscious, because of the death and violence she’d experienced? Or was Hisoka right and something seemed off? 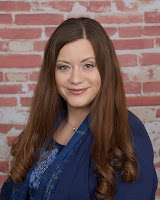 Haley Cavanagh is a military veteran, wife, and mother. She is an alumna of Columbia College, a musical theater nut, and she loves to dive into any book that crosses her path. Haley resides with her family in the United States and enjoys spending time with her husband and children when she’s not writing. She loves to hear from her readers, and encourages you to contact her via her website and social media.

The author is giving away a $10 Amazon/BN gift card during the tour via Rafflecopter.


Bonus Giveaway from the author!


a Rafflecopter giveaway
Posted by Andi at 3:30 AM