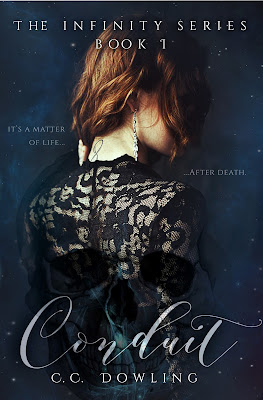 When college senior Jane Lamb dies suddenly, she discovers that the afterlife is less pearly gates and fluffy clouds and more standing in line at the DMV. But before she can spend eternity lamenting over her short, unremarkable life, she’s offered a do-over—as a Conduit, a reincarnated messenger contracted to reap souls.
Determined to do things right the second time, Jane takes the job and reincarnates as eighteen-year-old college freshman Liv Hartley. Only, the excitement for her new life doesn’t last. There are consequences to bearing the coveted infinity symbol tattoo marking her as a Conduit, and Liv quickly finds that getting a second chance doesn’t mean getting a better one. Possessive demons, stolen assignments, and a love life that’s decidedly complicated are all a far cry from the mundane existence Jane led. But with more questions piling up than bodies, there’s only one thing Liv knows for sure: life doesn’t get any easier after death.
Filled with sparkling wit, conflicted romance, and more spirit than a haunted mansion, Conduit is a fun-filled paranormal that explores the idea of regret, love, and what we would give to live twice.

Purchase yourself a copy HERE!

C.C. shares her love of writing with her love of singing, music, and science. She spent the first half of her college life performing, and the second half in a lab.

C.C. currently lives in America's finest city, with her husband (the financial shaman), her two children (who love to play in the yard with the faeries, and her very real pet dragon (who guards the perimeter of her house at night).

When she’s not working or writing (which is still technically working), C.C. can be found playing a round of disc golf, or desperately trying to figure out which pair of sandals are the most appropriate for the harsh Southern California winters.