'The Sword of Telemon (The Orfeo Saga Book One)' by Murray Lee Eiland, Jr. 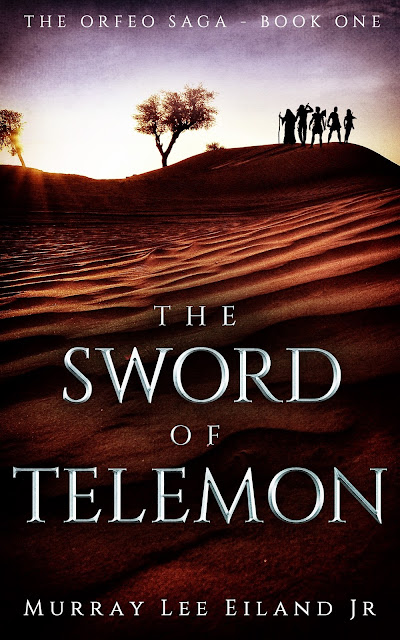 A young Achaean prince (from northern ancient Greece) is captured in a raid. His younger brother Orfeo, and a group of warriors are sent on a mission to look for him. Telemon, a legendary warrior, and Zurga, an elderly wanderer, are soon joined by Clarice, a girl who is a master of disguise. To their dismay they find that the kidnapped prince has been made a galley slave and that the maritime power of Thera plans to conquer the entire Mediterranean. Can they avert disaster?

Faint sounds seemed to mingle with the breeze, as they came first as distant whispers and then in wave-like gusts, now louder or softer, resounding along the valley walls and over the hilltops, carrying both a pleasant reminder of spring-awakened splendor and a sense of unease. Subtly the day’s stillness dissolved into disarray, as the restful rippling of the clear mountain stream now found counterpoint in the echoes of a great bronze bell, erupting in a voice of gentleness and power. A sense of alarm arose, and faint cries of assembly carried from the valley, where men ran to join the commotion around the king’s great tent.

Orfeo had been sitting on a flat rock overlooking the encampment when he recognized that something had gone wrong. Raising himself more in disbelief than concern - as though his repose on the meadow and the bleating of his small goat flock made mockery of the frantic shouts below - he fastened his sandals and bounded from stone to stone toward the path and then raced in long loping strides down the hill. The goats could look after themselves until he found them later. When King Kiros summoned his people neither kinsmen nor retainers delayed, and now the mounting noise from below gave further spur for haste.

As he entered the encampment Orfeo heard first the clatter of swords in preparation for use before isolated words gave him a glimpse of what had happened. “A raid,” he heard repeated. Someone must have seen danger approaching, and the image brought with it a vision of the Hannae from the north, galloping on their small, swift horses, bringing fire and pillage in their wake. Once as a boy Orfeo had cowered in a thicket of juniper as the swordsmen had stood their ground against invaders and had finally driven them off. Now he was ready to stand with the others, still a boy, perhaps, at sixteen summers, but able to wield a sword and hold his place in the line. He ran toward his father’s tent, dodging nimbly among the assembling warriors. The bell now sounded at close quarters and sent a chill of excitement through the crowd. Standing on his platform before the great tent stood the king with raised arms. Three armed men had pushed before him with weary movements, as if they had run a greater distance than the others and had already encountered the enemy.

“What news do you bring?” asked the king.

“We were too late,” gasped the leader, Tyron, falling to his knees in shame and frustration.

“They reached the ship before us and sailed.” He was trying to catch his breath. “They jeered at us as we reached the shore.” He held his weapon’s hilt in smoldering rage.

“Then they are captive,” said the king as if the admission robbed him of all inner peace. “My oldest son, Herron, and three companions were attacked today and seized by raiders.”

Those in the crowd who had not already heard the news reacted both with shame and anger.
“It was a slave ship of Tyrian merchants,” added Tyron. “They landed several raiding parties, and they took captives among the men of Ikea to the south.”

“Herron must be returned,” said the king with a voice more focused upon a course of action.

“We must rescue or ransom my son from the slavers.”

About the author:
My name is Murray Eiland Jr. I was born in 1936 and attended UCLA, UC Berkeley and UCSF (MD, 1961). I worked at Napa State Hospital from 1965-2000, and then at Contra Costa County Mental Health Clinic from 2000-2011. I continue to work for the court as a forensic psychiatrist as well as consult. I am happy that I have helped many people.

In my free time I became interested in Oriental rugs. With my brother (who is still in the business) I opened a rug store. I wrote several books on oriental rugs, most recently with my son, who is an archaeologist. I have always been interested in ancient cultures, and during my travels to collect rugs I visited many areas of great antiquity. It was this experience which promoted me to write the Orfeo Saga. My foray into the private investigator genre was stimulated by my time in Los Angeles.
Posted by Andi at 5:12 PM