Review of The Conduit by Stacey Rourke 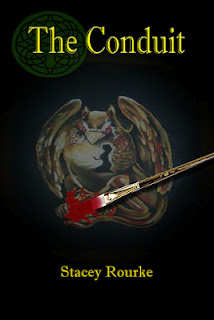 Celeste and her siblings get shoved from Michigan to Tennessee, to stay with their spunky grandmother. There have simply been too many break-ins around their home in Michigan, so their mother thinks they will be safer down there. She has no idea how wrong she actually is.

All Celeste wants to do is get ready for college in the fall. Her brother, Gabe, is a college dropout. Her younger sister, Kendall, is preoccupied with Keith across the street. Alec is the cute cameraman who accidentally enters Celeste's life and peaks her interest.

One day while out in the woods, Celeste runs into an old woman who presents as a large, exotic bird. She tells Celeste that they have been looking for her and her siblings for quite some time. Celeste passes out, only to be rescued by Alec. As she recovers, she finds a note explaining to her the power of the empathe. She begins to notice changes in her ability to read the feelings of others. Gabe starts to swell up like the Hulk. Kendall is literally floating on air in love. The transformation into superheroes is just beginning for these three, who have a centuries' old battle getting ready to reignite.

Celeste and her family are amusing characters. The siblings have a strong bond that unites them in their fight against evil. They can encourage each other while also harassing each other to no end, just as you would expect siblings to do. Their quirky grandmother allows for a lot of other comic relief. Early on in the book, I had a weird feeling about Alec. Something is missing from his story, which will likely develop in the second book.

I felt like the characters grew into their powers almost overnight, not really having a lot of time to prepare, nor a lot of instruction before they were thrust into battle. They had a quick rundown of their ancestor's history with the Gryphon, but a lot of questions have been left unanswered. Their battles have only just begun, though, and more should be revealed as the series continues.

The Conduit is a fast read, with short chapters. I read it in just a couple of hours while sitting outside this summer. It ends somewhat abruptly with a cliffhanger that isn't completely surprising, yet enough to whet your appetite for the next part. It's a fun story, with lots of promise for future installments.

I received a free copy of this book in exchange for my honest review.

This book is available in both hard copy and for your Kindle.

Email ThisBlogThis!Share to TwitterShare to FacebookShare to Pinterest
Labels: paranormal