Meet Rana from The Chasm by Branwen O'Shea

Branwen O'Shea is back! And today in addition to an excerpt from her book The Chasm, we get to meet Rana of Peleguin Rookery, one of the characters. And if you follow my blogs at all, you know how excited I get when the characters come to visit! (Authors, I do love you as well. These characters visits are just much rarer!) So please enjoy and ask both Rana and Branwen more questions in the comments section. Follow the tour to see what else is going on. Best of luck entering the giveaway! 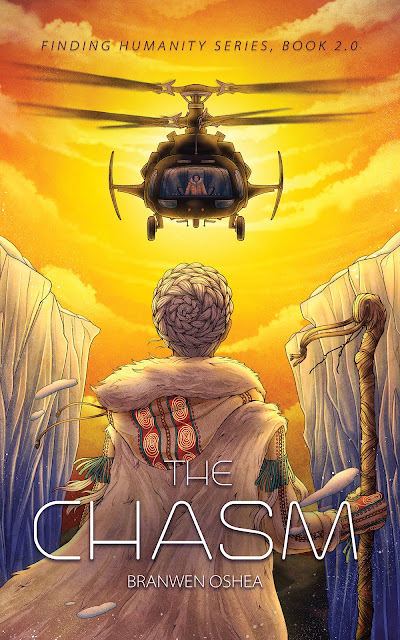 They thought the biggest problem they faced was each other.

After Bleu, Rana, and their new friends narrowly prevent war between the star beings and humans, they hope the upcoming negotiation will secure the peace. Newly emerged from their subterranean haven, the Northern Haven humans are clearly not suited to Earth’s ice age, and require assistance from the enlightened star beings to survive long term on the Surface. But Commander Savas doesn’t trust the suspiciously kind star beings and their unexplainable abilities. When both sides reluctantly negotiate a joint mission to find the other Havens, Bleu must somehow cooperate with the manipulative commander to keep his friends safe.

As their team confronts unexpected dangers, Bleu and his teammates begin to suspect the star beings don’t know as much about the Surface as they claimed, while Rana is torn between remaining true to her nonviolent ways or becoming more human to survive. When an unnatural predator attacks, even the nearly all-knowing Kalakanya can’t explain it. Now the team must pull together or their new discovery will pull them apart, limb by limb.
Read an excerpt:

As the sun descended behind the mountain and darkness crept across the frozen field, a strange dread seeped into Bleu’s bones. It felt like a warning, an alarm that danger lurked nearby.

He had known safety in Rana’s village, and he’d lost the spatial anxiety caused by the wide-open spaces of the Surface that differed so much from the cozy walls and tunnels of home. No, this unease wasn’t spatial anxiety to the openness of the sky and horizon.

This was different, and perhaps a bit similar to what Kahali feared. Bleu had never faced the possibility of other humans with guns. His team sat out in the open, exposed. The meager light from the cooking fire did nothing against the shroud of blackness surrounding them. No safe walls protected them from physical attacks or bullets. And then, there were the unknown predators of the region.

His earlier excitement of finding the footprints evaporated, leaving behind a gnawing awareness of their vulnerability. The darkness beyond the campfire could be punctured any moment by monstrous claws or gunfire. Childhood tales of the evil Undescended crowded his mind with images so ludicrously terrible that he wanted to laugh at himself.

Instead, he checked that they were all armed and sent Savas and Neviah to make sure the helicopters were locked. Animal calls and crunching footsteps drifted down the mountains as if something were encircling them. Even the confident star beings kept glancing out into the night. They should be comfortable in such wilderness, right? 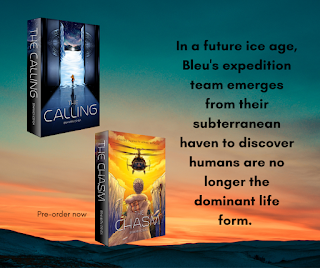 How would one of your characters describe you as a writer?
Hello, my name is Rana of Peleguin Rookery and I am a star being teen in The Chasm and all of the Finding Humanity series. I have never before directly addressed readers, so this is a little odd. Also, since we star beings speak our own language, writing this directly in first person is awkward—a bit like running a translation program through Branwen.

I directly met Branwen in 2011. She was not yet a novelist, but I came to her in a dream. She’s quite open to other dimensions, so it was easy to reach her and give her the story of this series. She immediately, even during the dream, was full of questions. She is like this in her own life and also as a writer. She could go on for hours telling you about the future ice age: world-building information she has gathered on us star beings, the cultures of the various last human havens, and the Ruined, a new terrifying species who enter the story in this second book, The Chasm.

From what I’ve observed of other authors, Branwen is extremely stubborn about remaining true to the story we gave her. This has resulted in her forgoing traditional publishing to maintain full creative control and ensure she can complete the series the way we planned. I should be clear that while I gave her much of the story, there are a few areas where I thought it best that she fill in the details herself, because as the one living here, she can make it fit into typical human entertainment much better than I could. She often doubts herself, but she has never doubted the story I gave her.

I should also note that she is quite democratic and doesn’t just listen to me. The morning after the series of dreams, she met the other POV characters as well: Bleu Reinier, Atsushi Collins, my best friend Kahali, and Commander Savas.

Branwen sometimes has difficulty wrangling certain characters to stick to the original story. No one who read the first book, The Calling, would be surprised to hear that Commander Savas often wants things written to put him in a better light. (He also thought he should write this blog post, lol.) You humans would probably consider him a “villain.” He, of course, considers himself more a hero. It seems a lot of powerful humans currently think this way. Branwen, whose day job is a therapist, often sees right around his tricks and keeps the narrative moving toward the goal.

I suspect the Ruined will keep her busy as well. Not being human, regular psychology won’t work on them. And they are not kind and striving towards enlightenment as us star beings are. In fact, from what I’ve seen so far in The Chasm, they’re full of hatred and revolted by humans. I suspect there’s more to them than that, but I don’t want to talk beyond what I ‘know’ in The Chasm.

I’ll tell you a secret Branwen doesn’t often talk about. (…much typing by Rana and deleting by Branwen…)

Falling stars, Branwen can be stubborn. Okay, forget that, she’s not going to let me say it. I’ll just say that if you feel moved by the characters or story, Branwen is quite friendly and approachable and loves discussing anything about us. People seem to not know they can contact authors, but Branwen would love to hear your thoughts on her books. The easiest way to reach her is probably on Twitter, where she often goes to connect with other authors and readers. As long as you’re not creepy, she’d love to hear from you. 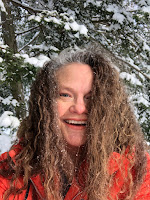 Branwen OShea has a Bachelors in Biology from Colgate University, a Bachelors in Psychology, and a Masters in Social Work. She lives in Connecticut with her family and a menagerie of pets, and enjoys hiking, meditating, and star-gazing. Her published works include Silence of the Song Trees, The Calling, The Cords That Bind, and The Chasm.

Branwen OShea will be awarding $30 Amazon or B/N GC to a randomly drawn winner via rafflecopter during the tour.
a Rafflecopter giveaway
Posted by Andi at 4:00 AM