Check out the first book in this serial novel, including an excerpt below! And then stay tuned for more! 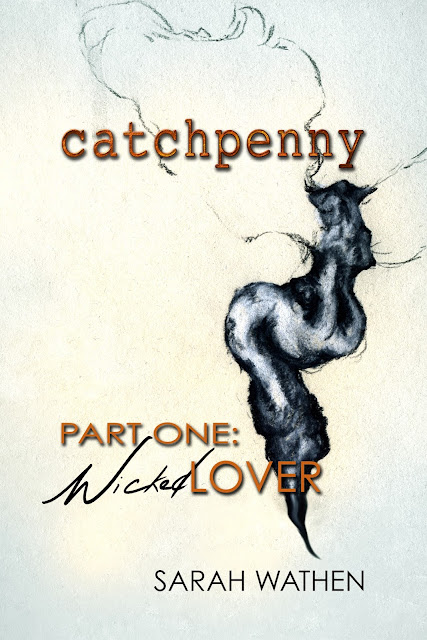 Have you ever wondered about that girl at the edge of the crowd? The one who has dark, bushy hair that hides her eyes while she's reading, but tight shirts that don't even try to hide the size of her breasts? You've heard the rumors, you know the rude nicknames, and you wonder what she really does when she's not in school. She never comes to parties and she lives in a neighborhood where nice girls never venture. Everyone tries to ignore her...but there is something about her that's impossible to ignore. Especially for the star quarterback, apparently. Because he just asked her to the Homecoming dance, after dumping the head cheerleader.

Catchpenny tells the story from the eyes of "that girl," and Wicked Lover is just the beginning of this coming of age serial novel. The small town minds of Shirley County have underestimated Meg Shannon for too long. She’s even more fun than she is trouble…but maybe she has finally met her match. 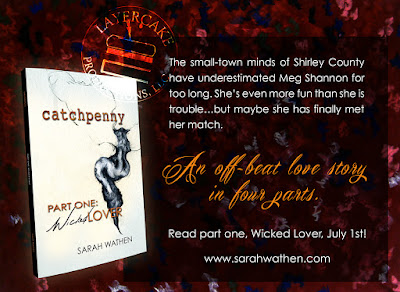 I opened up Tolstoy’s Anna Karenina, the pages blue after letting my closed eyes bake in the sun. I thumbed a few pages forward to see where the chapter ended, not really in the mood for reading, but always more comfortable to have a book in hand at lunchtime.
“Meg?”
He was standing just behind me, his head cocked to one side, looking over my shoulder at the Tolstoy. I gasped—I couldn’t help it.
“Hi, I’m Tristan.”
He was squinting into the sun, and it was hard to tell if he was smiling or frowning.
“Yeah, I know who you are.”
He shaded his eyes and laughed. Didn’t everyone know who he was? He was on the billboard in front of the football field, for god’s sake, his arm cocked back to throw a winning pass. Go Bobcatts!
“What are you reading?” His voice was soft and curious, with the hint of a Southern drawl that you didn’t hear in my neighborhood. High-class molasses. He squinted to read the pages I held open in my lap.
“Uh…” I faltered. The sun shone through his light irises like glass, shocking against his dark hair. His black polo shirt was gathered loosely around one hip, the hand in his pocket pushing it up casually over the waistband of his jeans. A slice of flesh was made visible. He stood in perfect contrapposto, bookbag slung over his shoulder like Michelangelo’s David holding the slingshot. I closed my book and tossed it onto the table, pretending not to notice how his jeans hung, low and delicious on slender hips. “Just something for English Lit.”
“How can you read out here? It’s so bright.”
Because I’d rather read a book than sit alone with no one talking to me. “I heard that people with light eyes have a harder time adjusting to bright light.”
“Really?”
He stepped closer to me, shifting his weight and putting his back to the sunlight. The color of his eyes reminded me of Halls Mentho-Lyptus cough drops after I’d sucked on one for a while and the zing got too strong to keep it in my mouth—icy blue and transparent.
“I don’t want to bother you or anything,” he said, dropping his voice lower, since we were face to face then. He smelled like soap and clean laundry, with something gritty underneath. Something undeniably male.
“No, I—” I cleared my throat. He was even better looking up close. “I’m not busy.”
He glanced back over his shoulder and the group of girls who had been watching suddenly picked up their conversation again, all of them talking at once and fumbling with their lunches. I was waiting with as much anticipation as they had been—why on earth was he talking to me?
“I’ll let you get back to your book, but I just wanted to ask you something.”
“Sure. What’s up?” Those eyes.
“Would you be my date for Homecoming this weekend?”
“Cough drop—” I spluttered.
“Huh?”
I slapped my chest and choked out a cough. “I mean…uh, the dance?”
“Yeah, the dance.”
“Wait. Don’t you have a girlfriend?” I wasn’t exactly buddies with anyone in the popular crowd at Andrew Jackson, nowhere close. But everyone knew that the star quarterback and the head cheerleader had been together since freshman year. Sugary sweet.
“No. I don’t have a girlfriend.” That smile again, but with an undercurrent in his voice.
The neighboring table had gone silent once more, the bombshell news of Tristan’s single status freezing them all mid-prattle.
“Absolutely.” I grinned over his shoulder—a present for our shocked audience.
“Absolutely, you’ll go with me?”
Did he really think I would say no? The curiosity itself was enough for me to agree.
“Sure. Why not?” I shrugged, like it was nothing to me. Yeah, right.
“Great. Okay, lemme just get your number...” He handed me his phone and I punched my number in, wondering what kind of psychedelic rabbit hole I had accidentally wandered through. Had somebody drugged my orange juice that morning? He took his phone back and saved, whispering, “Meg…Shannon,” as he typed. “Okay. Well, I’ll see you around, then?”
“Yeah, see ya.” I resisted the urge to bite down on my knuckles.
He winked at me and waved over his shoulder as he turned back to the courtyard entrance. His jeans looked even nicer from behind, snug around his well-shaped glutes and muscular thighs. “Bye, Meg.”
“Bye.”
I picked my book up again, refusing to gaze at his retreating form in concert with the other females. A wink, though. What did that mean? Maybe it was just the bright light on his Mentho-Lyptus eyes. I opened Anna Karenina again and pretended to concentrate for the rest of lunch. But I couldn’t read another word. 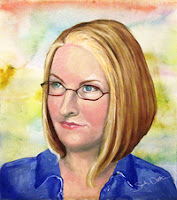 Sarah Wathen is an artist and an author. A painter at heart, she says, “Writing a book was my obvious next step, once I realized I’d been trying to tell stories with pictures for years. Painting with words is even more fun than painting with oil.” In 2012, she founded the independent publishing house, LayerCake Productions, specializing in the fun part of creative writing, like original artwork, video trailers, and musical soundtracks. She lives in Florida with her husband, son, and at least a dozen imaginary friends from her novels. Her characters are derived from the people and places that have influenced her own life, but the stories they live will take you places you have never imagined and won’t want to leave. 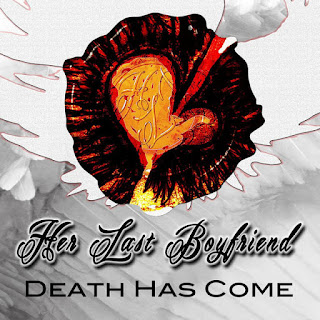 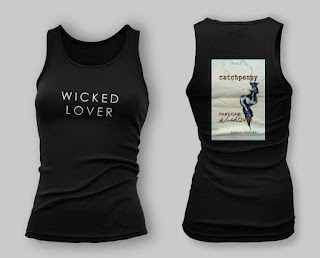 a Rafflecopter giveaway
Posted by Andi at 4:26 PM